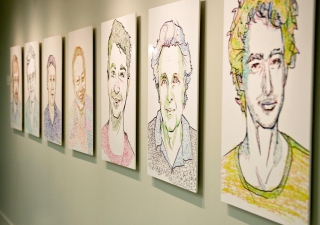 This series captures an era in Theoretical Physics through the faces of the Protagonists: some of them are the Pioneers, who laid down the ground for string theory by uncovering the mathematics that describes the world; then comes the New Generation, who after the Second Superstring Revolution reinvented the theory; and finally today’s PostDocs and Graduate Students, who will take up the challenge of the future of Physics.

For the Scientists, by the Scientists, the making of Portraits of String Theorists was a collective effort to glorify this moment in scientific history. It grew out of a Simons Summer Workshop in Mathematics and Physics poster in which the main theme was to pay attention to the people describing their vision and create a poster about the researchers themselves. This project was carried out during several weeks of meetings in New York City and Stony Brook, where String Theorists gathered to fill the portraits of their colleagues, each with their own equations. Each Protagonist’s face is a tribute to her/his own work and to String Theory, forged by the very pen of peers. By looking closely you will recognize worldsheet actions, equations of motion, partition functions, flatness equations, higher genera Riemann surfaces, geometric transitions, scattering amplitudes, superspace constraints, integrable hierarchies, topological vertices, superconformal indices, black hole entropy formulas, holographic dictionaries…the whole zoo of mathematics that constitutes String Theory. This series is a celebration of the very people who every day push the edge of knowledge. This is a story narrated by them, in their own secret language.

FILLED – The Simons Center for Geometry and Physics Seeks a Deputy Director
The Nature of Belief: An Interactive Journey Through Your Mind’s Eye