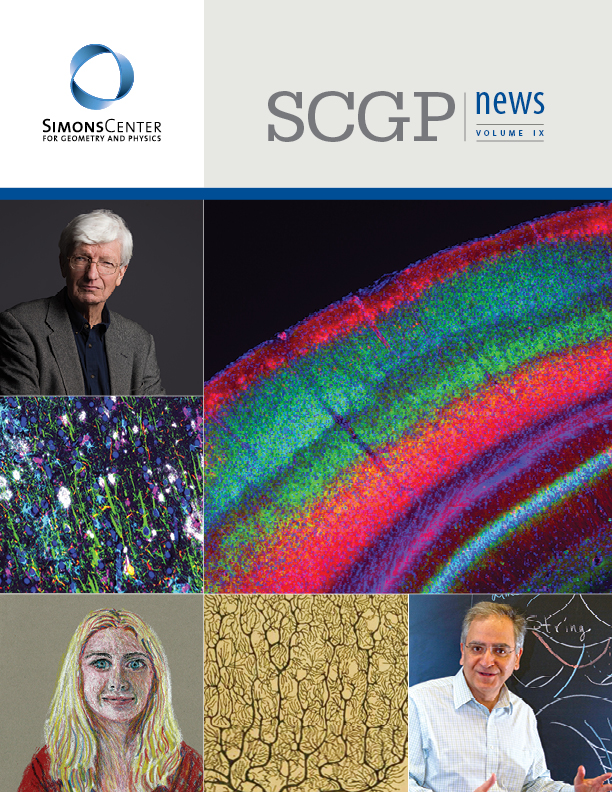 The Simons Center for Geometry and Physics is pleased to announce the latest issue of SCGP News, a biannual publication which reflects the Center’s mission, scientific activities and cultural events.

Carl Schoonover’s acclaimed book Portraits of the Mind is a fascinating visual odyssey exploring how we investigate the workings of the human brain through images—from medieval sketches and 19th century drawings by the founder of neuroscience, to state-of-the-art techniques that fuel research today. Schoonover is a postdoctoral research scientist in the Axel Laboratory at Columbia […]

Professor of Physics, Harvard University Chairman of the SCGP Board of Trustees Interview by Maria Shtilmark   The recipients of the 2017 Breakthrough Prizes were announced on December 4th, 2016, marking the organization’s fifth anniversary recognizing top achievements in Life Sciences, Fundamental Physics and Mathematics. Dr. Cumrun Vafa, along with Drs. Joseph Polchinski and Andrew […]

Director of Energy Research, Oxford University President SESAME Council Interview by Maria Shtilmark Thank you so much for the fantastic talks you gave at the Simons Center. The Della Pietra lecture  series has also hosted David Gross, with whom you have written your article “High Energy Neutrino-Nucleon Scattering, Current Algebra and Partons,”[1] which resulted in […]

Leon H. and Ada G. Miller Chair of Science Racah Institute of Physics, Hebrew University of Jerusalem Interview by Elyce Winters Edited by Maria Shtilmark   Welcome to the Simons Center. Could we start with what is your area of research? Thank you. Well, I am a particle physicist, one of the breed that you […]