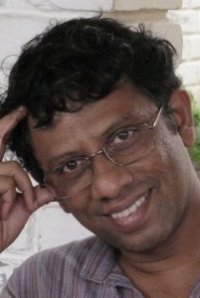 An interview with Rajesh Gopakumar. He got his PhD from Princeton, under the supervision of David Gross, and he is now at the Harish-Chandra Institute for Theoretical Physics in Allahabad, India.

Gravity is not what it used to be: a new paradigm is emerging for understanding the insidious facets of quantum gravity. It is called holography. On the way, it might reshape the way we look at string theory too!

Gravity is the most misterious of all the laws of nature. For the last century, it has driven theoretical physicists nuts, starting with Einstein. He was the very first one to understand its relation with geometry. Entire generations of scientists spent their lives trying to reconcile the two cornerstones of last century physics: gravity and quantum mechanics. In the last years, building on the formidable insights of Leonard Susskind and the Nobel Laureate Gerard ‘t Hooft, it looks like we might be on the right track. But to follow that track, we must leave behind our own intuition and embrace a new vision of the universe. We are talking about holography. The first concrete example of a holographic gravitational system was put forward by Juan Maldacena in 1997 in the context of string theory. Recently, some researchers have found that holography is a much broader concept than even string theory and we might be closer to crack the secret code of gravity. Keeping our fingers crossed, we have asked some clue to Rajesh Gopakumar, an indian physicists among the pioneers of these new developments.

What is holography?
Holography is a radically new conception in our attempt to capture physical reality in terms of mathematical laws. Traditional descriptions of physical phenomena have often involved new and (sometimes) unseen entities (atoms, fields, quarks). But these entities have always lived in the same spacetime in which the phenomena occur. However, holography seeks to describe gravity, in its quantum manifestation, in terms of a completely different spacetime and very different looking degrees of freedom. In particular, the holographic description is in terms of objects living in one lower dimension than the spacetime where we are describing gravity.

What does holography teach us about gravity?

In many ways, we knew that gravity is qualitatively different from other fundamental forces of nature: it is universally attractive and it is encoded in the geometry of spacetime itself. But holography points to a deeper difference – the number of degrees of freedom in gravity are far fewer than those of other forces.

They are only as many as in the lower dimensional “screen”. This is reflected in the fact that the entropy (a measure of the number of degrees of freedom) of black holes is proportional to the area rather than the volume of the horizon in which it is contained. In fact, this was one of the first clues that there may be a holographic description of quantum gravity.

The first example of a holographic spacetime came from string theory. But recently you and others found that it does not require string theory at all…

The phenomenon of holography certainly appears to be more general than the contexts in string theory where it has been largely studied. With Matthias Gaberdiel, we have recently studied this phenomenon in a theory which is simpler than string theory and at the same time more complicated than a theory involving only gravity. This theory may be a good laboratory to understand the nuts and bolts of holography.
Is there a way to experimentally test string theory using holography?

One might be able to indirectly test the correctness of ideas in string theory by using holography, in contexts far away from those originally imagined. I have in mind the potential to use holography to compute quantities in strongly interacting condensed matter systems in terms of gravitational computations. If one can find distinctive experimental signatures this way, that would be quite a strong confirmation of at least the ideas of holography and in the most optimistic case, string theory.

Is there a new ‘string’ revolution in sight?

I believe many ingredients (technical as well as physical) are being put in place for one to take the subject to a new level. Subjects like string theory require periods of sustained but non-dramatic developments to lay the base for “revolutionary” jumps. I would not be surprised that a synthesis of many scattered ideas (which are already present) together with some new insights can lead to an important breakthrough in the near future.

Your long term research program is to understand the bare bones of holography. Which is the simplest example and what does it teach us?

In some ways the simplest dynamical example of holography are perhaps the ones involving higher spin theories, that I mentioned above regarding my work with Matthias Gaberdiel. However, I have also been looking at other toy examples which do not really have gravity but are holographic in a precise way. These involve the so-called topological string theory. I think these have some of the bare bones features of holography that we have grown used to seeing in more complicated examples. The advantage here is that one can explicitly try and understand how the holographic connection arises.

The holographic correspondence has gradually shifted the way scientists look at string theory, abandoning the ‘theory of everything’ interpretation in favor of a more operational use. You cited for example condensed matter, or even nuclear physics. What is the status of string theory today?

String theory has shown itself to be a powerful framework which has a great deal of flexibility. Rather than just being a candidate theory of quantum gravity or particle physics beyond the standard model, it has also become a more general tool. In some ways it is a nontrivial generalization of the framework of quantum field theory which was used not just to describe the forces in particle physics, but also condensed matter phenomena (such as superconductors, quantum hall effect), fluid dynamics and even mathematical finance. I imagine that string theory will play a similar role in the future with people in different disciplines using it because it has the power to tackle problems which are often beyond the conventional capabilities of quantum field theory.

Indeed. While there are ideas of how to use holography in the realistic case of a positive cosmological constant, nothing firm has emerged yet. People are trying, but some key idea seems to be absent…

Is there a relation between this new holographic program and Verlinde’s idea that gravity is not a fundamental force?

Verlinde’s idea is very provocative and is in the spirit of the holographic idea, but making an even stronger statement about the nature of gravity. It is not completely clear as of now that this stronger statement is theoretically consistent with other things we know (such as in the AdS/CFT correspondence).