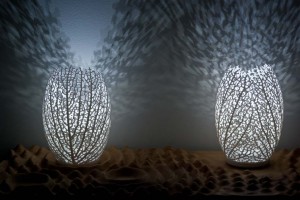 Artist Talk by Jessica Rosenkratz and Jesse Louis-Rosenberg: 6:30pm, SCGP Room 103
Jessica Rosenkrantz and Jesse Louis-Rosenberg will speak about their creative process and the works featured in the exhibition. Topics will span the scientific phenomena that inspired the pieces, the generative systems that grow them, and digital fabrication techniques used in their manufacture.Watch the Video

‘Growing Objects’ explores processes which cause structure and pattern to emerge in nature.  The projects center around adapting the logic of these processes into computational tools; this is done by translating scientific theories and models of pattern formation into algorithms for design.  The artists, Jessica Rosenkratz and Jesse Louis Rosenberg (of nervous system) are interested in phenomena that span all media: biological, physical, chemical, social; from cellular structures to cracking patterns; from viscous fingering to leaf venation.  The design systems they encode are “generative,” meaning they have no fixed outcome. Rather than thinking of them as mere tools, they use them as  their medium. These systems are digital materials with inherent properties and behaviors.  Their practice uses simulation techniques not simply to mimic natural forms, but to extend and bend these techniques to unnatural ends.  The resultant forms are realized through digital fabrication techniques such as 3D printing, laser cutting, and CNC routing.

Each project examines a different model of growth.  Jessica and Jesse explore theories and simulations of leaf venation, biological patterning (reaction diffusion), and dendritic solidification. The final results are forms that could not emerge in nature but propose a new way of thinking about how we can design or “grow” our environment.

Nervous System is an experimental, interdisciplinary design studio composed of Jessica Rosenkrantz and Jesse LouisRosenberg and founded in 2007.  Jesse and Jessica are artists, designers, programmers, makers, and entrepreneurs. Jessica graduated from MIT in 2005 and holds degrees in architecture and biology. Afterward, she studied architecture at the Harvard Graduate School of Design.  Jesse also attended MIT, majoring in mathematics. Nervous System’s designs have been featured in a wide range of publications, including WIRED, Metropolis, and Forbes. Jesse and Jessica have given talks on their generative design process in many forums, including MIT, Carnegie Mellon, SIGGRAPH, and the Eyeo Festival.

The work of Nervous System emerged from Jesse and Jessica’s combined interests in biology, mathematics, computation, and design. The work is rooted in the study and application of broad range of topics including developmental biology, fluid dynamics, microbial biology, geology, and phase transition.

For more information and images of our work please visit: http://nervous.com 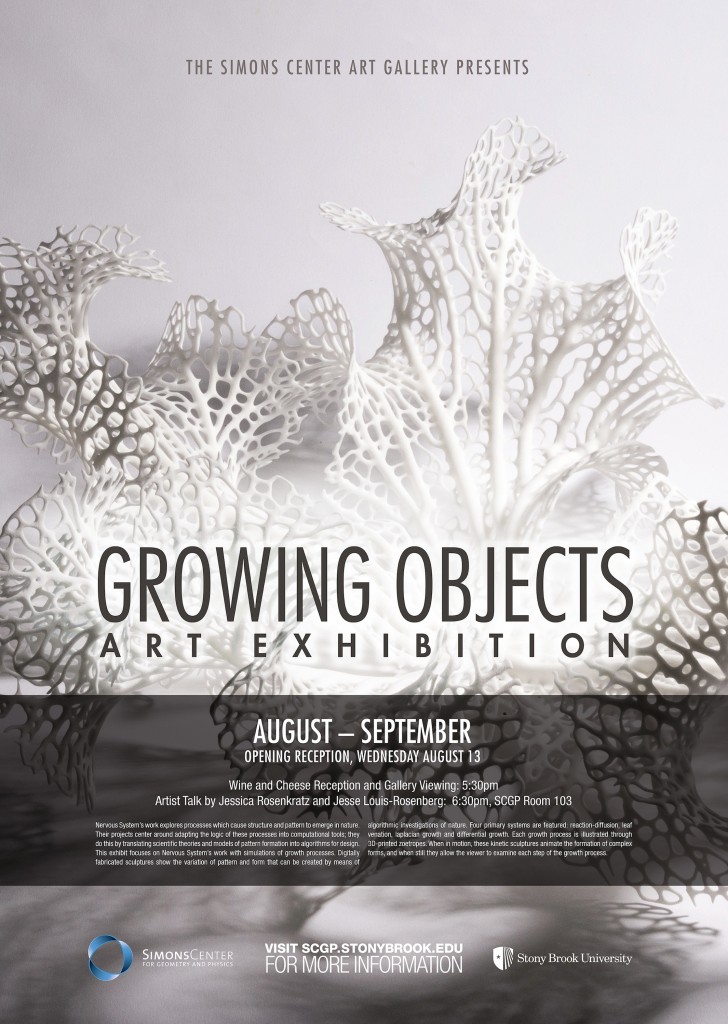