The Simons Center Gallery is pleased to announce the opening of HIDDEN SYMMETRIES, an exhibition featuring pre-Columbian art from Tony Phillips’ collection of mathematical textiles.

11:00 am: Introductions by Luis Álvarez-Gaumé, Director of the SCGP.
Film (30 minutes) and Lecture: “‘Labyrinths’ and its Making” by Michele Emmer, Professor of
Mathematics, La Sapienza University of Rome. Conversation with Tony Phillips, Professor of Mathematics, Stony Brook University

All lectures and films are in the Della Pietra Family Auditorium, SCGP 103. 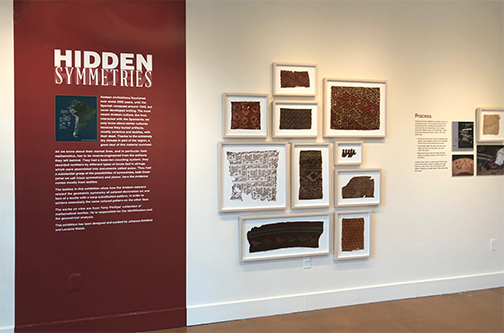 About the pre-Columbian art in “HIDDEN SYMMETRIES”

Andean civilizations flourished over some 3000 years, until the Spanish conquest around 1540, but never developed writing. The most recent Andean civilization, the Inca, interacted with the Spaniards; we only know about earlier cultures because they buried artifacts, mostly ceramics and textiles, with their dead. Thanks to the extremely dry climate in part of the region, a great deal of this material survived. 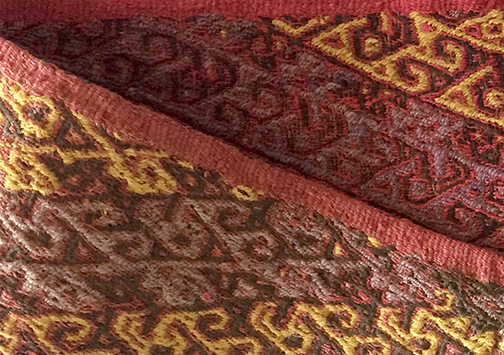 All we know about their mental lives, and in particular their mathematics, has to be reverse-engineered from the artifacts they left behind. They had a base-ten counting system: they recorded numbers by different types of knots tied in strings, which were assembled into documents called quipu. They had a substantial grasp of the possibilities of symmetries, both linear (what we call frieze symmetries) and planar; here the evidence comes mostly from textiles.

Weavings in this exhibition show how the Andeans could adapt a warp substitution scheme to the geometric symmetries of a colored decoration, in order to achieve essentially the same colored pattern on both faces of a textile.

On view in the gallery are thirty-one textiles, along with two pieces of pottery,  dating  mostly from the later pre-Columbian civilizations in Peru. These samples give just a hint of the extent and quality of an artistic tradition that produced woven masterpieces unsurpassed in history. 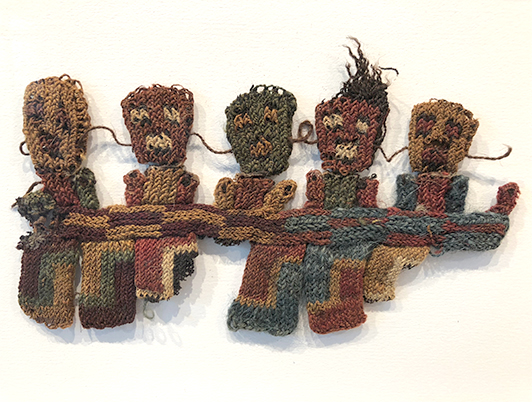 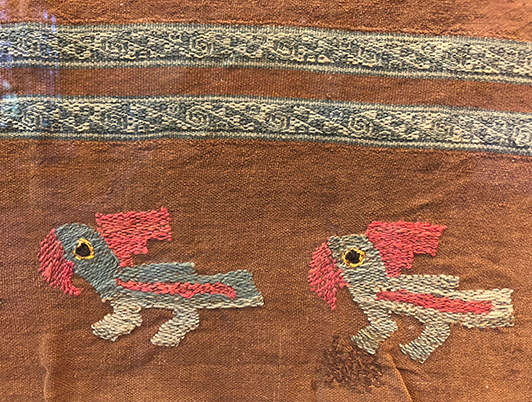