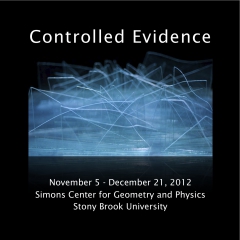 The preeminent authority on data and statistical visualization, Edward Tufte, wrote “the commonality between science and art is in trying to see profoundly – to develop strategies of seeing and showing.” Controlled Evidence showcases artists working across the science-art boundary, offering new perspectives on science, technology, and society through multiple art forms including print, sculpture, interactive auditory and visual display, artificial intelligence, and video transcoded into sound. Interpreting and understanding “big data” is one of the challenges of our time; the artists in this exhibit capture, curate, manage, and process information to create compelling works which are chimeras of art and science.

In this collection of pieces, works are created at least in part by some outside source of data that is not under the artist’s control. Some of the pieces are generated in real time through data collected via the internet: In RYBN’s work a trading “robot “ buys and sells stocks in the name of art, while Art of Failure’s Internet EEG gives a visualization of the time it takes the Simons Center to return signals sent to government servers from all countries in the United Nations. Nicolas Maigret’s work System Introspection allows the viewer to interface with the data via a trackpad, creating sound and video directly from the files on the hard drive of a used computer. Similarly, Shawn Greelee’s Sieves creates sound from algorithmic treatment of video, transcoding pixels in the image into audio samples. The prints in Songs of Milarepa were created through an inverse process in which image is derived from sound. Melissa Clarke’s sculpture ice gouge can be seen as a cast of a multitude of data types into a single object referencing the qualities of ice, while Paul Prudence’s simulations of recursive functions using software simulated video feedback generate organic shapes from methodical methods.

In the October 2012 issue of the Harvard Business Review, Thomas H. Davenport and D.J. Patil posit that the people with the skill set (and mind-set) to put big data to use are at least as important as the technology itself. “The dominant trait these new data scientists is intense curiosity—a desire to go beneath the surface of a problem, find the questions at its heart, and distill them into a very clear set of hypotheses that can be tested. This often entails the associative thinking that characterizes the most creative scientists in any field. Think of him or her as a hybrid of data hacker, analyst, communicator, and trusted adviser. The combination is extremely powerful—and rare.” One could say the same for artists working with big data; they have the desire to distill large data sets into a form comprehensible as artwork. The artists in Controlled Evidence are powerful and rare hybrids of hacker, analyst, communicator, and creative scientist.

Margaret Anne Schedel (curator) is a composer and cellist specializing in the creation and performance of ferociously interactive media whose works have been performed throughout the United States and abroad. While working towards a DMA in music composition at the University of Cincinnati College Conservatory of Music, her interactive multimedia opera, A King Listens, premiered at the Cincinnati Contemporary Arts Center and was profiled by apple.com. She holds a certificate in Deep Listening with Pauline Oliveros and has studied composition with Mara Helmuth, Cort Lippe and McGregor Boyle. She sits on the boards of 60×60 Dance, the BEAM Foundation, Devotion Gallery, the International Computer Music Association, and Organised Sound. She contributed a chapter to the Cambridge Companion to Electronic Music, and her article on generative multimedia was recently published in Contemporary Music Review. She is a joint author of Electronic Music and is working on an issue of Organised Sound on sonification. Her work has been supported by the Presser Foundation, Centro Mexicano para la Música y les Artes Sonoras, and Meet the Composer. She has been commissioned by the Princeton Laptop Orchestra and the percussion ensemble Ictus. In 2009 she won the first Ruth Anderson Prize for her interactive installation Twenty Love Songs and a Song of Despair. Her research focuses on gesture in music, and the sustainability of technology in art. As an Assistant Professor of Music at Stony Brook University, she serves as Co-Director of Computer Music and is a core faculty member of cDACT, the consortium for digital art, culture and technology. In 2010 she co-chaired the International Computer Music Conference, and in 2011 she co-chaired the Electro-Acoustic Music Studies Network Conference.
Art of Failure‘s artists Nicolas Maigret and Nicolas Montgermont experiment the capacity of the contemporary technologies to generate specific sound or visual languages. In their realizations, the internal characteristics of the media are revealed through their errors, dysfunctions, borderlines or failure threshold, which they develop sensory and immersive audio visual experiences. Their works have been presented in various exhibitions and venues such as File (Sao Paulo, BR) – Encountering Data (New York, USA) – Upgrade! (Chicago, USA) – Gli.tc/h (Birmingham, UK) – DeOrigenBélico, (Caracas, VE) – Sonica (Ljubljana, SI) – Leeds Film Festival (UK) – Le Zoo (Genève, CH) – Artivistic (Montreal, CA) – ESG (Kosice, SK) – Cimatics (Brussels, BE) – Gaite Lyrique (Paris, FR). 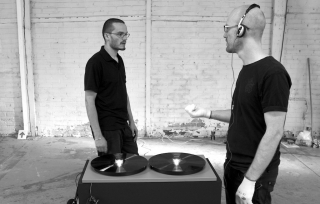 Melissa F. Clarke is an interdisciplinary artist obsessed with ice and information related to the terrain shaped by it who has recently returned from the Arctic. Using data, Clarke extrapolates research and observation into systematic points that unfold in generative video and sound sculptures, performances, and printed still images. Melissa usually works across mediums as a series unfolds, such as her untitled antarctica work, which contains topographical mapping while looking at hybridizations of wilderness and technological spaces—towards considerations of nature at the nexus of human experience, myth, science, and information collection. Often working at the intersections of research, science, art and design at the core of many of Clarke’s projects is a fascination with information culture, the ways that we’ve been collecting, quantifying, organizing and then dissembling and sharing information about the world around us. Clarke’s work has been referred to as ‘sublime’ and she maintains that, nature, culture, science, and technology, they’re not binary pursuits. Especially with technology and information we bring together vast systems while we divide in these contexts, and often we reach an equal or tipping point between separation and vastness, this brings a sense of the sublime into the work.

Shawn Greenlee is a sound and electronic media artist. In recent performance and installation work, Greenlee focuses on generating digital audio from graphic patterns. Via computer programs of his own design, he advances new methods for interpreting visual image as sound (graphic synthesis). Further areas of investigation evident in his work include psychoacoustic phenomena, sonic environments, sound synthesis, telecommunications, and noise. Greenlee is Assistant Professor of Foundation Studies at the Rhode Island School of Design. He earned his Ph.D. in Computer Music & New Media at Brown University (2008) where he was affiliated with MEME (Multimedia and Electronic Music Experiments). Other education includes an MA in Computer Music & Multimedia Composition from Brown University (2003) and a BFA in Printmaking from the Rhode Island School of Design (1996). His discography includes releases on the labels IYNGES, Load, Utech, Corleone, Vermiform, Hospital Productions, and History of the Future. Touring extensively, Greenlee has performed at venues ranging from galleries and concert halls to clubs and warehouses across the United States and Europe. He has given solo performances at festivals and conferences such as International Computer Music Conference (2011 Huddersfield, UK and 2005 Barcelona), IN TRANSIT (2008 Berlin), Elevate (2007 Graz), Boston Cyberarts Festival (2005), Performance Studies International (2005 Providence), New West Electro-­‐Acoustic Organization (2004 Portland and San Diego), and Listening in the Sound Kitchen (2003 Princeton). Recently his gallery work has been featured in exhibitions at Ludlow 38 in New York City and at François Ghebaly Gallery in Los Angeles. As part of the Fluxama collective, he is an active developer of musical instruments for mobile platforms. Releases to date include Noisemusick and DR-­OM for iOS. As sound designer, Greenlee worked on the 2006-­‐07 re-­‐doings of Allan Kaprow’s 1959 work 18 Happenings in 6 Parts featured at Haus Der Kunst (2006, Munich) and the Performa Biennial (2007, New York). Other points of reference include his solo electronic music under the moniker, Pleasurehorse (1997-­‐2007); and his membership in the noise-­‐rock bands Landed (1997 – present) and Six Finger Satellite (1999-­‐2001).
RYBN.ORG is an extra-disciplinary artistic research platform, funded in 2000 as a web entity, 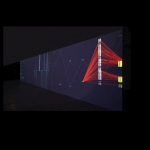 disseminated into various servers all over the internet and physically present in Paris, Berlin and Bruxelles. RYBN.ORG is specialized in the realization of interactive & networked installations, digital/analog visual cross-performances and software art. Their projects refer as well to the codified systems of the artistic representation (painting, architecture, avant-garde, music) as to the socio-politic and physical phenomenons, exploring various fields such as economics and data mass analysis, artificial intelligence and disrupting auto-learning, language and syntaxes, sensory perception and cognitive systems. Their work have been shown in numerous contemporary art exhibitions and new media art festivals, such as : Transmediale, ISEA, Elektra, Cellsbutton, Ars Electronica, and museums and institutions like the CNAP, CNAM, LABoral, le Centre Pompidou, La Gaîté Lyrique and ZKM.

Nicolas Maigret experiments the capacity of the contemporary technologies to generate specific sound or visual languages. In his realizations, the internal characteristics of the media are revealed through their errors, dysfunctions, borderlines or failure threshold, which he develops sensory and immersive audio visual experiences. He begins in 2002 with Between 0&1, a digital process tripping through binary data and their intrinsic qualities. In the current project, Infinite Stream Loop in duet with Nicolas Montgermont, an audio stream probes the Net and offers a perception of the network’s unstable and intangible space.

Paul Prudence is a audio-visual performer and installation artist working with computational, algorithmic and generative environments. His work, which had been shown internationally, focuses on the ways in which sound, space and form can be cross-wired to create live-cinematic visual-music experiences. He is also interested in data visualisation techniques, process-based environments and emergent systems. Paul maintains the research weblog Dataisnature in which he writes about the interrelationships between natural processes, computational systems and procedural-based art practices. He has authored chapters in a number of books covering visual effects and interface design in the Flash environment. He is also a regular contributor to Neural magazine which covers new media art, electronic music and hacktivism. He has given lectures and workshops to a wide range of audiences and venues – from Master of Arts students to art-science conferences and through to digital arts festivals. He has presented his personal work and his inter-media research at venues such as The Royal Institution and The Science Museum in London, The School of Visual Arts in New York City, and a number of academic institutions in Europe.
Photos
[Show as slideshow]