Carl Schoonover’s acclaimed book Portraits of the Mind is a fascinating visual odyssey exploring how we investigate the workings of the human brain through images—from medieval sketches and 19th century drawings by the founder of neuroscience, to state-of-the-art techniques that fuel research today. Schoonover is a postdoctoral research scientist in the Axel Laboratory at Columbia University where he studies the neural circuitry of odor-driven behaviors. He has written for The New York Times, Le Figaro, and Scientific American, and is the co-founder of NeuWrite, a collaborative working group for scientists, writers, and those in between. The Simons Center Art and Science Program was honored to invite him as a guest speaker for the spring 2017 exhibition The Elegant Brain at the Simons Center Gallery. Featured here are six selections from Schoonover’s wonderful book.

Selections from Portraits of the Mind:
Visualizing the Brain from Antiquity to the 21st Century by Carl Schoonover 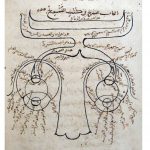 The oldest known depiction of the nervous system seems reassuringly well ordered: a large nose at the bottom, eyes on either side, and, flowing out of each eye, a hollow optic nerve that meets the other for a moment before they part ways and continue on to the back of the head— all of this meticulously named and cataloged. From this unadorned sketch, drawn in eleventh-century Cairo by Ibn al-Haytham, comes a premise that is so elementary as to seem almost trivial: In the nervous system, information travels. From here we go on to formulate the more exciting—and more explicit—hypothesis: At each stop in its path, signals from the world outside are somehow processed, interpreted, or put to use. How information travels from one part to another inside the brain, and how it is processed at each step, is the business of neuroscience.

Al-Haytham’s drawing was based in part on the teachings of Galen of Pergamum, a second-century Roman physician and anatomist who, although dead for eight centuries, continued to exert an outsize influence on the world of brain science. In ancient Rome, Galen worked in an environment of relative permissiveness when it came to cutting through bone and flesh to study the organs underneath, an activity that religious and legal restrictions subsequently rendered taboo for centuries thereafter. Since human dissection was off limits, he employed as his subjects a veritable zoo—apes, dogs, bears, stags, camels, and one elephant. Otherwise, his exposure to human anatomy was restricted to wounded gladiators and rotting or deteriorated corpses that he came upon by accident.

The shape of ventricles.
Leonardo da Vinci, circa 1508.

With religious authorities issuing blanket bans on dissection after Galen’s era, many anatomists relied on interpretation of and commentary on his findings, which he meticulously cataloged in a series of hundreds of treatises. Many of these were lost in a fire, and if he did draw figures summarizing his findings, none are known to exist today. Thus, our vision of Galen is one that is necessarily mediated by the eyes and minds of his followers. His fragmented output, from an era more open to exploration, crystallized, amplified, and took on baroque characteristics of its own as it bounced around the libraries of Europe and the Middle East throughout the Dark and Middle Ages. His words were dissected under the pen; his theories were bent to accommodate the leading views of the time. Occasionally his views were challenged—especially in the Islamic world—but by and large his theories became dogma.

An early proponent of what would soon become a forceful return to the study of actual anatomical samples, the Italian polymath Leonardo da Vinci often conducted his dissections in secret, as restrictions began to be cautiously relaxed. Dissatisfied with Galen’s description of the ventricles, and seeking a way to more accurately determine their structure, Leonardo realized that the brain was sufficiently complex that cutting and looking alone would not succeed. To circumvent this problem and study ventricles in their unadulterated state, he turned to a statue-casting technique, injecting melted wax into the ventricle of a freshly killed ox while siphoning off the excess fluid through holes poked in the other end. After the wax had cooled and solidified, he carved the surrounding brain away until nothing was left but the shape of the cavity. Leonardo’s drawings of ventricles, c1508, (not shown here) depict his rendering of the cavity from both the vertical and horizontal view.  If the history of neuroscience is a history of seeing, then Leonardo ushered in the conviction that our eyes alone cannot do the trick. 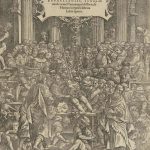 Frustrated by the limited opportunities during his time in medical school to, as he delicately phrased it, “put my own hand into the business,”[1] Vesalius overcame any moral qualms—and the occasional pack of wild dogs—to scour local cemeteries for human remains. In response to this bold departure from traditional anatomical study, Vesalius’s former mentor, Jacobus Silvius, once implored his colleagues to “pay no attention to a certain ridiculous madman, one utterly lacking in talent who curses and inveighs impiously against his teachers”[2] and urged the powers that be “to punish severely… to suppress him so that he may not poison the rest of Europe with his pestilent breath.”[3] Clearly, Vesalius was onto something. Yet in a town still in the thrall of Galenic theories, Vesalius’s unsettling obsession with performing his own dissections raised eyebrows and led him to settle in Padua, Italy, where his research program received a greater measure of support. There, he was supplied with a reliable stream of corpses fresh off the gallows, whose deaths were occasionally timed to accommodate his workflow. Vesalius’s dissections occasionally became massive public affairs, bordering on the ceremonial, for the benefit of students, colleagues, dignitaries, and assorted gawkers. The frontispiece of his 1543 magnum opus, De Humani Corpus Fabrica (On the Workings of the Human Body), seen here, hints at the flavor of these events.

It was his dissections in Padua, and an epiphany induced by a side-by-side display of human and ape skeletons, that put the proverbial nail in the coffin on Galen’s anatomy. Vesalius realized that while his Roman predecessor had claimed to be characterizing human anatomy, the structures he had described more closely matched the anatomy of other animals—a fact that is hardly surprising in retrospect, since in Galen’s Rome human dissection was prohibited. What Galen had failed to account for was the possibility that his findings in apes, stags, and dogs might not prove true for humans, as well. 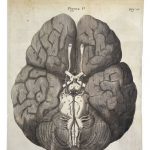 View of a human brain from below.
Thomas Willis and Christopher Wren, 1664.

Descartes’s vision of the nervous system as mechanism would find its experimental realization across the English Channel in the work of Thomas Willis and Christopher Wren. Willis, who wielded the scalpel with consummate virtuosity, generated a mass of anatomical knowledge that set the new standard for neuroanatomy after Vesalius. Wren is perhaps best known for having designed Saint Paul’s Cathedral in London, but when he wasn’t drawing up building plans, he found the time to make significant contributions to the fields of mathematics, astronomy, and—assisting Willis—anatomy. Together, they synthesized their observations into a single, coherent, three-dimensional whole, as shown here. With human dissection now increasingly mainstream in most of Western Europe, they provided an account of neuroanatomy that was vastly more precise than that of Vesalius, shifting the emphasis away from the ventricles and back to brain substance itself.

The ventricular theory fell apart when Willis, who pioneered novel dissection methods noticed that the ventricles collapsed the instant the organ was
removed from its case. Concluding that the ventricles were merely “a complication of the brain infoldings,”[4] Willis turned his interest to the arterial system, the dense web of blood vessels that innervates the
tissue. He believed these served as the conduits for a “nervous juyce” of animal spirits sloshing around in the brain. In order to examine the vasculature’s labyrinthine structure, Willis would inject a dyed solution into an artery and follow its tortuous path through the brain, echoing Leonardo’s prescient method for studying the ventricles, and confirming once again that the unaided eye would not be sufficient to the task of studying this organ. His ingenious method of observation, which illuminates arteries and relegates the rest to the background, finds a direct expression today in cerebral angiography. 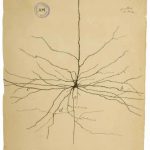 Modern neuroscience begins with the neuron, a cell that collects, processes, and transmits information to other neurons in the brain. This illustration shows a pyramidal neuron drawn from observation by Spanish neuroscientist Santiago Ramón y Cajal in 1899. Its nucleus and DNA reside in the soma, the thickened area at the center. What distinguishes a neuron from other cells in the body is the striking set of long appendages that radiate from it—think of them as antennae that neurons use to communicate with one another across the expanse of the brain. The thicker dendrites, the cell’s “receivers,” rise upward and outward in this illustration, while the thinner axon, the “emitter” of a neuron, drawn here only in part because of its considerable length, shoots downward. Unlike with antennae, however, transmission in the brain is not wireless, and the infinitesimal spaces between these neural appendages gave rise to an epic scientific battle one century ago.

The hypothesis that a neuron could be discrete—distinct from yet connected to others—once divided the most credentialed voices in neuroscience, and the schism ultimately made its way to the august podium of the 1906 Nobel Prize awards ceremonies. The committee had chosen to honor both Cajal and his scientific rival, the eminent Italian Camillo Golgi, for their respective contributions to the study of the brain. Golgi believed the brain was continuous, made up not of individual parts but rather an uninterrupted reticulum, a single mesh. Cajal, on the other hand, argued that the existence of the neuron as a self-contained entity supported a view of the brain as a network of distinct, interconnected units. He reached this conclusion, ironically, using a chemical staining technique pioneered by his rival. Named the reazione nera (black reaction), Golgi’s method stains a very small fraction of individual neurons in brain tissue, while, crucially, leaving all others invisible. Why only approximately one percent of neurons incorporate the black stain—a mix of potassium dichromate and silver nitrate—remains a mystery to this day, but this selective viewing rendered invisible the impenetrable tangle of brain tissue and facilitated previously unthinkable access to the neural universe. In their Nobel lectures, the two scientists laid out their respective visions of the neural world, while taking shots at each other—some of them courteous, others decidedly not. 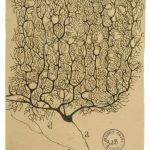 By the time Golgi and Cajal’s argument made its way to the Nobel celebrations in Stockholm in 1906, scientific opinion had mostly turned against Golgi’s theory, and the audience was reportedly dumbfounded as he proceeded to attack Cajal’s views from the stage. That the Spaniard won the neuron-versus-reticulum debate, along with a host of other skirmishes, is a testament to his prodigious knack for synthesis. He apparently did not sketch what he saw with a pen in one hand and the microscope’s focus knob in the other. Instead, he is said to have drawn from memory, in the afternoon, after a morning of observation. Though the details were of course of great importance, what mattered most to Cajal was the general form, the common properties, the essence of the specimen’s overall architecture. Studying tissues ranging from birds to humans, he focused on the commonalities, uncovering deep principles of brain organization. His amply documented interest in the visual arts suggests why his renditions of biological samples are so exquisite and hints, perhaps, at why he was able to identify
underlying forms where others saw only lines.

This drawing shows a Purkinje neuron that is strikingly different from its pyramidal cousin in the previous drawing but built along similar lines. Although the two types of cells play very different roles in the brain, they share the same blueprint: at the center, the soma; radiating up and out, its many thick, branching dendrites; traveling down and beyond the frame, a long, thin axon. ·