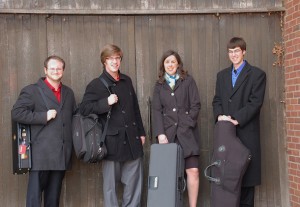 QuadrATOMIC Saxophone Quartet brings a refreshing sound and attitude to the world of chamber music through their passion for playing and presenting music to new audiences.  Formed in 2009, the group quickly earned recognition for their performances across the United States, including earning the Coleman-Saunderson Prize for Woodwinds or Brass at the 2010 Coleman Chamber Ensemble Competition in Pasadena, CA.  In addition, QuadrATOMIC won the 2009 Pennsylvania State Music Teachers National Association Chamber Music Competition and advanced to the quarterfinals of the 2010 Fischoff National Chamber Music Association Competition.

Summer of 2012 marks QuadrATOMIC’s third anniversary as a group as well as the start of their second educational outreach tour.  After a highly successful series of dates in school districts and communities throughout New York and New Jersey in 2011, the group has made it their mission to continue providing exciting and engaging programs for audiences of all ages in both traditional and uncovential concert venues.

QuadrATOMIC also performed at the 2010 United States Navy Band International Saxophone Symposium and the 2010 North American Saxophone Alliance Conference.  In April of 2010 the group was named the 2nd place winner of the Duquesne University Wind Symphony Concerto Competition and performed Bob Mintzer’s Rhythm of the Americas with the Duquesne University Symphonic Band at Carnegie Hall in Pittsburgh, Pennsylvania, under the baton of Dr. Robert Cameron.

Included in QuadrATOMIC’s performance will be Motherless Child Variations, a composition by Dr. Perry Goldstein, Professor of Music at Stony Brook University. It is with great honor that the quartet dedicates their performance at the Simons Center to Dr. Goldstein, whose musical contributions to the saxophone quartet genre are both significant and beautiful works of art.