This is the second workshop in the Simons Center Program on Foundations and Application of Random Matrix Theory in Mathematics and Physics. This workshop will highlight future and recent applications of Random Matrix Theory to physics with main focus on applications to quantum systems, integrable systems, and disordered systems. Since the first applications of Random Matrix Theory to the levels of nuclei and to the localization of wave functions in disordered solids over half a century ago, the field continues to generate a great deal of excitement in both in established topics and new areas such as quantum information and field theory. To mention a few of these developments, in QCD chiral RMT was extended to study non-zero matter density including lattice artifacts. These applications involve non-Hermitian random matrix ensembles interpolating between different ensembles in the ten-fold classification according to symmetric spaces. Such interpolating random matrix ensembles were also found in quantum chaos and recently in condensed matter theory. In the latter topic the strength of the magnetic field is the interpolating parameter. The crucial role of topology is a common factor in both QCD and condensed matter theory and can be understood in terms of RMT as well. In QCD, topology of the gauge field configurations is essential for the spectrum of the Dirac operator. In condensed matter theory topology led to the classification and discovery of topological insulators and superconductors. It enters in the transport properties of mesoscopic systems, and could be essential for the discovery of Majorana fermions as well as details of the localization properties of wave functions. Other developments of RMT can be found in quantum information where RMT has been used to describe decoherence and coupling of quantum states to the environment. In particular, randomly generated quantum states have been used to study entangled quantum systems. Also in this topic topology can be identified and reflects the rank of the density operator. These examples are particular cases of integrable systems associated to RMT. However the theory of integrable systems in RMT is not restricted to those examples alone. It became a research topic of its own and exhibits a plethora of application.

This workshop will bring together experts from particle physics, quantum information, and disordered systems together with specialists in mathematical physics and integrable systems. Topics to be discussed include experiments with microwave billiards, properties of the Wilson Dirac operator and the sign problem in QCD, localization and scaling relations of critical exponents, Brownian motion and deformations of random matrix theory, localization properties of band matrices, Anderson localization in QCD, transport in disordered media, Toda lattice structures and supersymmetry, disordered systems and entanglement entropy in quantum information. 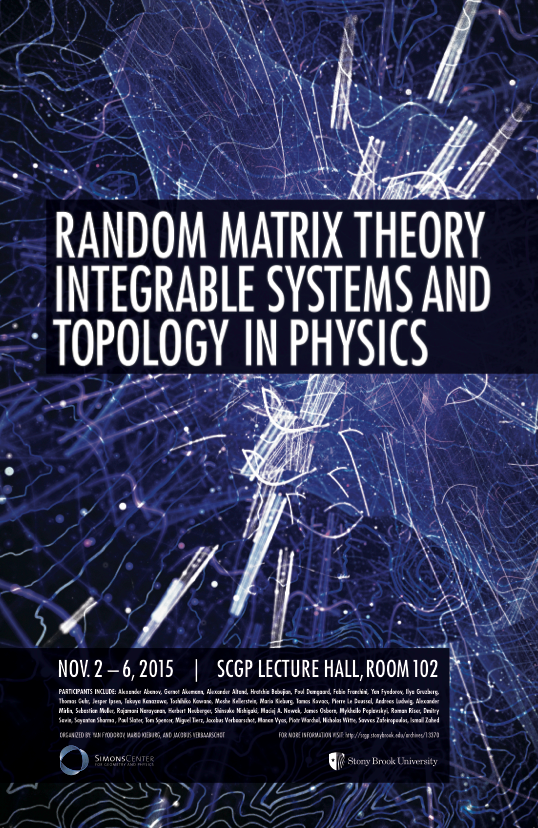