The evolution of an asymptotically free gauge theory from large Euclidean momentum in the ultraviolet (UV) to small momentum scales in the infrared (IR) is of fundamental field-theoretic importance. The evolution of the gauge coupling is described by the renormalization-group beta function. There is particular interest in the properties of the theory at an IR zero of this beta function, where the theory is scale-invariant and inferred to be conformally invariant. Consider a vectorial gauge theory with a gauge group G and a set of Nf massless fermions transforming according to a representation R of G. There is a range of Nf such that the theory flows from the UV to a deconfined chirally symmetric conformal non-Abelian Coulomb phase (NACP) associated with an IR zero of the beta function, which is an IR fixed point (IRFP) of the renormalization group. In contrast, for small Nf , the theory exhibits confinement with spontaneous chiral symmetry breaking in the IR. Although a number of exact results have been established for supersymmetric gauge theories, many questions are still unanswered and are under current investigation for non-supersymmetric gauge theories; for example, (i) what is the minimum value of Nf (in a theory with a given G and R) for which the theory evolves to the NACP in the infrared? (ii) what are the scaling dimensions of various physical operators at the IRFP?

In the past few years there has been an intensive program of research to understand the properties of this evolution and the resultant conformal field theory better. This program has involved both continuum approaches (e.g., series expansions and conformal bootstrap methods) and lattice gauge theory simulations. It is also of interest to investigate theories which exhibit a slowly running coupling associated with an approximate IRFP and hence quasi-conformal behavior. The purpose of this conference is to bring together experts working on all of these approaches to conformal and quasi-conformal field theories, so that they may present their new results, learn about the work of other groups, exchange ideas, and hopefully generate new results. 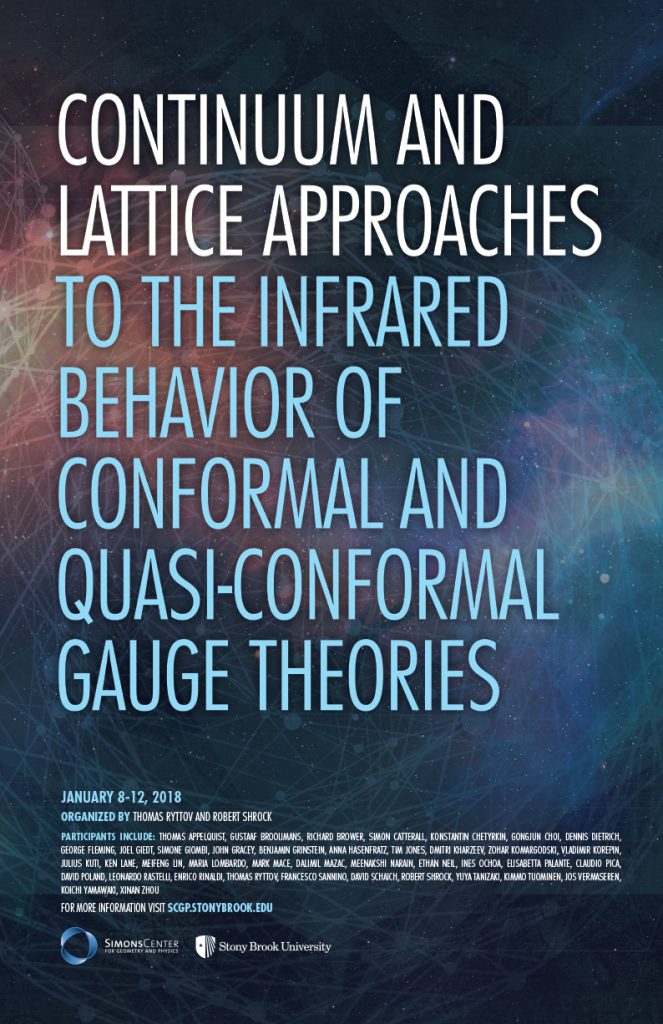