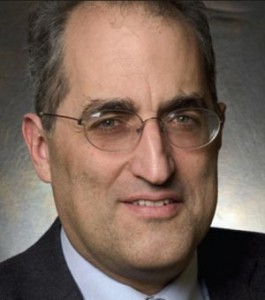 An interview with Ed Witten. Witten, at the Institute for Advanced Study, is the father of M-theory and his papers shape the way we understand theoretical physics today.

From history to politics, and then to string theory: the academic trajectory of the most famous string theorist is not what you expect. What string theory is and where it is headed in the words of Ed Witten.

During the recent opening gala, the SCGP was honored by the visit of the most renowned theoretical physicists. Certainly the most acclaimed one, Edward Witten came from the Institute for Advanced Studies. A recipient of the Fields Medal (the equivalent of the Nobel Prize for mathematics), Witten has shaped research in theoretical physics in the last twenty years, with a continuous series of insights, that have created a new symbiotic relationship between physics and mathematics. Their leit motif is the tireless pursuit of the true nature of string theory and its mysterious avatar: the “theory of everything” also known as M-theory. After his inaugural lecture, we sat down to chat with Witten, and learn about his past as a journalist and political activist and the future of physics and physicists.

You had a peculiar education for a physicist: graduating as a history student, writing for The Nation and even campaigning for George McGovern in ’72. What made you change your mind in favor of physics? Do you have any regrets?

Eventually I had the sense to realize that I had more talent for math and physics than for other fields. I’ve never regretted this decision.

The LHC is up and running, soon it will give us most awaited clues on the fundamental laws of nature. If you had to bet, what is the most likely scenario for new physics beyond the SM?

I am hoping that the LHC will discover supersymmetric particles. There are some clues in this direction, but to be honest, there are also clues in the opposite direction. We will have to wait and see. If supersymmetry is discovered, that will be a great thing – the beginning of our understanding the role of quantum variables in the structure of space and time.

Everybody talks about the Higgs boson. Do you think there is any chance that this particle will not be discovered at the LHC? If yes, what would the consequences be?

Let us talk about string theory. Would you give a simple explanation of what the theory is, and why it is so fascinating to you?

In ordinary quantum theory, an elementary particle such as an electron is a point particle, albeit one that obeys rather subtle laws of quantum mechanics and relativity. In string theory, the starting point is to reinterpret an electron as a little vibrating loop of string, again subject to quantum mechanics and relativity. This little change turns out to have amazingly far-reaching consequences. The most significant is that although gravity – understood in modern times in terms of Einstein’s theory of General Relativity – is inconsistent with standard quantum field theory, it is forced upon us in string theory. String theory automatically generates quantum gravity while pre-string physics makes it, as far as we understand, impossible.

Is there a chance to test string theory at the LHC?

Supersymmetry is a major element of string theory, so if it is found at the LHC that will be extremely significant. Moreover, if we could study supersymmetry experimentally, we could learn how it is realized in nature and this would probably lead to additional advances, now unforseeable.

Daniele Amati said that string theory is a piece of 21st century physics that fell by chance into the 20th century. Now that we are well into the 21st century, have we gained an understanding of what this theory really is and what its foreseeable applications are? Or should we wait for the 22nd century?

Good question! Certainly we understand much more than we did about forty years ago when Amati made the remark you are quoting. I think the scope of the theory has proved to be even greater than anyone imagined at the time that Amati made this remark. Still there is a lot that isn’t understood. There are plenty of exciting questions that are still wide open for young people of today.

To me, an inspiration for fundamental new mathematical constructions, a tool as powerful as statistical mechanics, and a new theory of the forces of nature are all very lofty objectives. Hopefully, in the long run string theory will provide all of these. A lot depends on how imaginative and lucky we humans will prove to be in understanding string theory.

A common criticism of string theory is that the theory has not provided so far a single prediction to be tested at experiments, namely that it is not falsifiable, or is it?

For now, we have to be satisfied with the fact that string theory automatically generates quantum gravity while the pre-string framework of physics makes this impossible (as far as we understand). This is a key point since after all gravity and quantum mechanics are both part of nature and they need to be combined somehow. String theory is the only real idea about combining them and has proved to be remarkably powerful. This is the main reason that people are excited about it.

Let us also remember that supersymmetry, which we search for at the LHC, is an idea that emerged in large part because of its role in string theory.

You claim that string theory is the only theory that incorporates quantum gravity. Some physicists make the same claim about a different theory: loop quantum gravity, which unlike string theory does not require any extra dimensions. This has generated some controversy in the literature. What is your take about this?

Instead of taking your question literally and giving a negative answer, I’d prefer to answer another question. One really can only expect string theory to be related to areas of mathematics and physics that have real substance. And indeed, it has fascinating links with numerous areas of science. A list would be too long to offer here, but would have to include the theory of strongly interacting gauge theories, heavy ion physics, the theory of quantum critical points, topological field theory, topological insulators, noncommutative geometry, twistor theory, and on and on.

Is there a new string revolution in sight?

I’ve lived through periods when I felt I could keep up with the most exciting lines of research I was interested in, and also periods where on the contrary there were many competing interesting things going on, making it hard to keep up. I’d say we are in a period of the second kind currently. As for whether a new string revolution is in sight, if it were in sight it wouldn’t really be a revolution when it would happen.

We are in the depths of a recession: time to talk about the job market. In the last few years, it has become harder and harder for string theory PhD’s to find a research job in their field. Why is this happening and do you think that this trend will continue?

Unfortunately the recession is a serious problem throughout society and in many countries it is having a serious impact on funding of scientific research, in many different fields. In particle physics, another factor is that naturally with the start of LHC experiments and exciting things happening in cosmology and astroparticle physics, there is plenty of interest in research activities with more immediate applications to those experiments. All these factors coming together have produced a very difficult job situation and the young people grappling with this situation have all my sympathy. For the future, I imagine that there will be at least some improvement but it is hard to say how quickly.

What kind of advice would you give to young students that are considering pursuing research in high energy physics? In your opinion, what are the most promising directions for physics?

There are many interesting areas depending on one’s particular interests. Astrophysics will be in a golden age for decades to come because of new observing capabilities. In condensed matter physics, the supply of interesting questions is certainly not slowing down. Particle physics will always have a special attraction for young people curious about the fundamental laws of nature.