Artist Talk by Michael Benson, Monday November 10
Reception at 5:00pm
Talk at 5:30pm in SCGP 102
Speaker: Michael Benson
Title:  Cosmigraphics: Picturing Space Through Time
Abstract:  Of all the sciences, astronomy is the one probably most associated with the graphic image. In part this is because of the unreachable and intangible qualities of the subject being studied, which seemed to demand the creation of images as a form of understanding. Centuries before the invention of the telescope, graphic representations of the cosmos could be found in illuminated manuscripts and printed books and broadsheets. After the arrival of the telescope in astronomy in early 1610, graphic representations became even more important; the use of the telescope in astronomy predated the invention of photography by more than 200 years (and the development of photographic emulsions of any use in astronomy by another 50 or 60). As a result, a steady hand and some talent in representation were of great use to the working astronomer. Following the use of photography, of course, images of space proliferated and discoveries started being made almost exclusively through use of photography. Throughout all this time, depictions of the universe in the arts kept up a steady dialogue with the results of astronomical research. More recently, the process of mapping or visualizing data streams from terrestrial observatories or space telescopes has been indistinguishable from the discoveries themselves; you could say that the cartography leads to the discovery, rather than the other way around. My talk will feature multiple examples of visual representations of the planets, their moons, and the larger universe beyond the solar system, and will allow me to present some of the research I will present in my new book Cosmigraphics: Picturing Space Through Time (Abrams, October 2014).  Watch the Video

Tracking the cosmos as a means to understand the order of the universe has preoccupied mankind for eons.  According to current scientists, the moon phases and constellations, including the Pleiades star cluster, are revealed within the painted imagery of the Lascaux Caves, France dating back 15,000 years.  Many of the standing stones from the Early Bronze Age in Britain & Europe are gouged with cup and ring marks, small holes on the rock surface surrounded by an incised circle, which have been identified recently by astronomers as constellation arrangements.  The Nazca Lines in Peru are believed to be a testimony to an understanding and depiction of the heavenly bodies above by ancient civilizations inhabiting this region around 400 – 650 AD.  Throughout history monuments, towers and observatories have all been designed and built to observe, record and capture the imagery of the stars, planets and any other activities in our galaxies.  Sky watchers of all civilizations have invented cosmologies, mythologies and solar systems to interpret the universe.  The artists selected for this exhibition present both mythological allusions to space travel, records of their own observations or the interpretation of scientific discoveries and data obtained tracking the cosmos.

“The mind admits the idea of limitless, through the greater impossibility of entertaining that of limited, space”  Eureka E.A.Poe 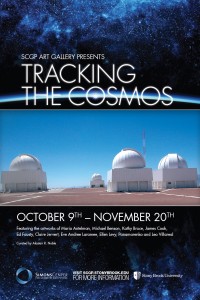