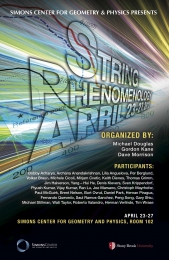 String phenomenology is the field which attempts to make contact between string theory and “real world” physics such as experiments at particle colliders, cosmology and astroparticle physics.  Especially after the duality revolution of the 90’s, major progress has been made towards constructing string models which reproduce the Standard Model, and predict diverse possibilities for “beyond the Standard Model physics” such as low energy supersymmetry, warped extra dimensions and others.  These models can also explain dark matter and the cosmic microwave background. This has involved technical progress in computing the particle spectrum and nonperturbative effects, moduli stabilization, supersymmetry breaking and on many other problems.  The field makes essential use of mathematics such as the algebraic geometry of Calabi-Yau manifolds and vector bundles, computational algebraic geometry, generalized geometry and special holonomy manifolds.

Besides covering recent developments in the area such as advances in computing nonperturbative corrections and in computing supersymmetry beraking terms, we plan to have several focus days, including one day on recent results from Cern, one on contact with mathematics, and another on systematic exploration of the space of models along the lines of the String Vacuum Project.