Due to the equivalence principle and the lack of an absolute space, the understanding of the fundamental notion of mass in general relativity has been subtle since Einstein’s time.  Arnowitt-Deser-Misner gave the well-defined definition for an asymptotically flat isolated system, while Bondi-Trautman gave the definition of mass after  gravitation radiation. By 1970’s, it was well-recognized that the positivity of these notions, which is intimately related to the stability of the system, lies in the foundation of the theory of general relativity.  There was an intense period of the study and the efforts culminated in the proof of the positive mass theorem by Schoen-Yau in 1980’s. The subject has since undergone rapid developments. Schoen-Yau’s proof led to the deeper understanding of initial data sets and trapped surfaces. Witten’s proof led to the notion of mass on asymptotically hyperbolic initial  data and the positivity.  Many new ideas and techniques from geometric analysis and physics emerge and are applied into the study.  The goal of this workshop is to provide a setting for the most cutting edge results to be presented, and to facilitate interaction among researchers. The topics include, but not limit to, the following:

1. Mass and boundary conditions: The notion of mass for asymptotically (A)dS space and the relation to the AdS/CFT correspondence.
The notion of Bondi-Trautman mass in higher dimensions.
The notion of quasi-local mass.

3. Mass and interior geometry: What does the mass defined at the (either finite or infinity) boundary tell us about the interior?
When the mass is small, the interior should be close to a flat space.
On the other hand, when the mass is large enough compared to other geometric data, black hole or trapped surface should form.
This is within the context of the hoop conjecture. 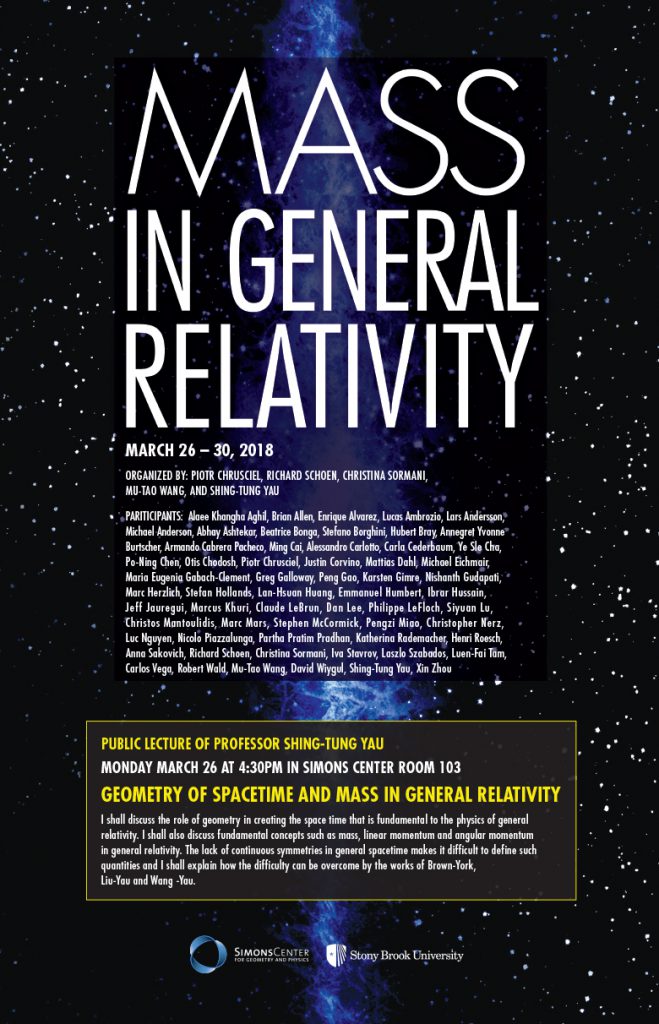