Director of the C.N. Yang Institute for Theoretical Physics 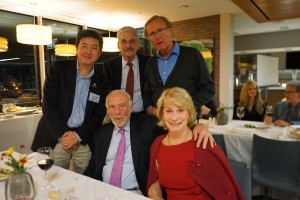 On October 9 and 10, the C.N. Yang Institute for Theoretical Physics (YITP) at Stony Brook University celebrated its fiftieth anniversary with a symposium of talks by faculty and returning alumni, held at the Simons Center for Geometry and Physics. The Institute for Theoretical Physics was founded in 1966, when Chen Ning Yang came to the then little known Stony Brook University, providing it instantly with an international profile. The concept of an ITP (renamed YITP after Yang’s retirement in 1999) was developed by the Physics Chair Alec Pond, by faculty member Max Dresden, and by Stony Brook President John Toll. Early faculty included Ben Lee, Gerald Brown, Ernest Courant and Max Dresden. Its first postdocs were William Bardeen, Hwa-Tung Nieh, Michael Nieto and Wu-Ki Tung, each of whom went on to make important contributions in particle physics, as did many of their successors into our own era. Bill Bardeen was among those who returned for the event.

The Institute is associated with milestone advances in gravity, including the discovery of supergravity, in particle physics and quantum field theory, as well as early work on the renormalization of gauge theories, in neutrinos and QCD collider theory, in statistical mechanics, and the Yang/Baxter equation and solvable models. Over five decades, YITP faculty have supervised approximately 250 doctoral graduates, and hosted nearly one hundred postdoctoral fellows, in addition to numerous visitors. Among doctoral alumni, Luis Alvarez-Gaume, long of the Theory Department at CERN, has taken on the role of Director of the Simons Center for Geometry and Physics, whose physics faculty are also members of the YITP. Other returning participants with current leadership roles included alumni Eric Laenen, head of the Dutch National Institute for Subatomic Physics NIKEF Theory Group, and Kostas Skenderis, Director of the Southampton Theory, Astrophysics and Gravity Centre, and former postdocs Stephen Libby, Leader of the Theory and Modeling Group at Lawrence Livermore Laboratory, and Jianwei Qiu, Associate Laboratory Director for Theoretical and Computational Physics at Jefferson Laboratory.

The symposium involved short reviews by current faculty, covering much classic material, combined with a variety of talks from returning participants on their experiences and current work. Reports on new results included those by Bernard de Wit (Utrecht/NIKEF) on the construction of N=4 superconformal theories, and by Shoucheng Zhang (Stanford) who spoke about topological insulators. At the end of the second day, the symposium concluded with a public lecture by alumnus Ashoke Sen (Harish-Chandra Institute) titled “What is String Theory?”. 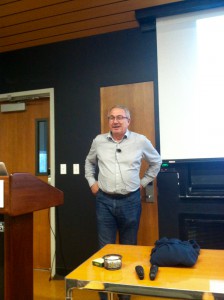 Luis Alvarez-Gaume as alumnus speaker at the YITP Anniversary Symposium

At the symposium dinner, participants saw a short video by the YITP’s founder, C.N. Yang, who now lives in China. Yang recounted that in 1966, “the opportunity and challenge proved irresistible” to found the ITP and take part in “building up a new research university” at Stony Brook. Referring to his years at Stony Brook as a “second career,” after the Institute for Advanced Study, he recalled the origins of supergravity and informal lectures from Jim Simons, which eventually “contributed to the increasingly close contact between the world communities of physicists and mathematicians.” At Stony Brook, this contact is facilitated by the Simons Center, and Jim Simons, founder of the Center and former chair of Mathematics at Stony Brook, was present at the dinner to recall his many conversations with Yang that led to those lunchtime lectures, and their friendship over the years. Yang concluded his video message by stating that, “at this celebration of the first 50 years of the ITP we can look forward to the next 50 years of close and fruitful collaboration between the ITP and the Simons Center, and we can also look forward to great advances in the unravelling of the fundamental structure of the physical universe.”

The symposium provided the chance for participants to meet with old friends and with new faculty, whose arrival has added to the breadth and depth of theoretical research at the YITP. In the past decade, seven faculty members have joined the Institute, beginning with Leonardo Rastelli, Director of the new Simons Collaboration on the Non-Perturbative Bootstrap, and followed by Patrick Meade, Rouven Essig and Christopher Herzog, all working in aspects of high energy theory; Tzu- Chieh Wei, in quantum information and condensed matter; Marilena Loverde, in cosmology; and just this year, Alexander B. Zamolodchikov, who has joined as the first C.N. Yang – Deng Wei Professor of Physics. The YITP is fortunate to be able to look with pride at the sweeping contributions of its past in research and in training, with a strong sense of momentum and optimism for its role in the future of theoretical science.

IT FEELS LIKE COMING HOME — CONVERSATION WITH LUIS ÁLVAREZ-GAUMÉ
A COOPERATION TO BUILD ‘THE FOUNDATIONS OF SYMPLECTIC GEOMETRY’
View our current version of SCGP News, Vol XII HERE!