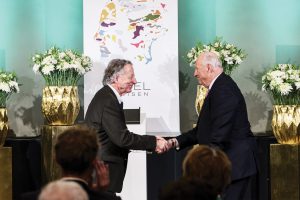 Dr. Dennis Parnell Sullivan, distinguished professor in the Department of Mathematics at Stony Brook University, is the 2022 recipient of the Abel Prize, an honor often described as “the equivalent of a Nobel in mathematics.” He is also the Albert Einstein Chair in Science (Mathematics) at City University of New York Graduate Center and a member of the Simons Center for Geometry and Physics (SCGP) Board of Trustees since its inception. With his award, Sullivan will receive several million Norwegian kroner funded by the Norwegian government.

The Norwegian Academy of Sciences and Letters awarded the Abel to Sullivan “for his groundbreaking contributions to topology in its broadest sense, and in particular its algebraic, geometric and dynamical aspects.”1 The Academy’s citation describes: “topology was born in the late 19th century, as a new, qualitative approach to geometry. In topology a circle and a square are the same, but the surface of the earth and that of a donut are different. Developing a precise language and quantitative tools for measuring the properties of objects that do not change when they are deformed has been invaluable throughout mathematics and beyond, with significant applications in fields ranging from physics to economics to data science.”2

As stated by Hans Munthe-Kaas, Chair of the Abel Committee: “Dennis P. Sullivan has repeatedly changed the landscape of topology by introducing new concepts, proving landmark theorems, answering old conjectures, and formulating new problems that have driven the field forwards…” He continues: “Sullivan has moved from area to area, seemingly effortlessly, using algebraic, analytic and geometric ideas like a true virtuoso.”

Sullivan received his PhD in 1966 from Princeton University and was given a NATO Fellowship at Warwick University in England the same year. He earned a Miller Fellowship at the University of California at Berkeley (1967-69), was The Sloan Fellow of Mathematics at Massachusetts Institute of Technology (1969-73), and awarded the Oswald Veblen Prize in 1971. Sullivan’s impressive academic trajectory continued in France (1973-74), where he was a professeur associé at the Université de Paris-Orsay. In 1974 he became a permanent professor at the Institut des Hautes Études Scientifiques until 1996, when he joined the faculty of the Department of Mathematics at Stony Brook University. From 1981 to the present he has worked jointly with the Einstein Chair Seminar of the Graduate Center, City University of New York.

A well-known figure at the Simons Center, Sullivan has won numerous awards, among them the 1994 King Faisal Prize, the 2004 National Medal of Science, the 2010 Wolf Prize in Mathematics, the 2014 Balzan Prize for Mathematics, and he was elected a member of the U.S. Academy of Sciences in 1982. “A charismatic and lively member of the mathematics community,”3 he has found deep connections between an extraordinary variety of areas of mathematics. Too numerous to include all, one of his most notable breakthroughs was a new way of understanding rational homotopy theory, a subfield of algebraic topology, using differential forms. With a colleague at Stony Brook, Dr. Moira Chas, Professor of Mathematics, a new field of “String Topology” was begun.

Dr. Maurie McInnis, president of Stony Brook University, said it well: “Professor Sullivan has made outstanding scientific contributions in the field of mathematics, and we are very proud of the impact he has made throughout his illustrious career, especially on those he has mentored.”