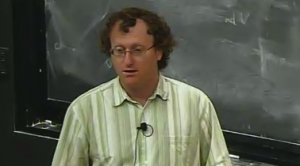 [box, type=”download”]Watch the video.[/box]
Abstract:
While Lie groups are at the center of both the mathematics of representation theory and the physics of gauge theory, the questions asked of them in the two fields have traditionally been rather disparate. In recent years the development of extended topological quantum field theory both in math and in physics (with seminal contributions by Lurie and Kapustin-Witten, among many others) has allowed gauge theory to emerge as a powerful new organizing structure for questions at the heart of representation theory and harmonic analysis. In this talk I’ll present a toy model for this interaction, recasting representations of finite groups in the light of two-dimensional gauge theory, and illustrate recent developments with a new geometric derivation (joint with David Nadler) of Harish Chandra’s characters for infinite dimensional unitary representations of Lie groups, based on three-dimensional gauge theory.