The Della Pietra Lecture Series is pleased to present a series of lectures by Dr. Fumiharu Kato, Professor, Tokyo Institute of Technology, Department of Mathematics
November 15-17, 2022

Title: Neverending Numbers That Continue to the Sky
Abstract: The story begins with a mysterious “number” that is not normally possible, “a number with infinite digits that does not change even if it is squared.” Such “numbers” do exist, but in order to accept them, we have to break down some common sense about “numbers.” However, if we accept it, the vast, free and deep world of mathematics lies beyond. The world of numbers you can find there is not the world of “ordinary” numbers such as real numbers and complex numbers, but the so-called “non-archimedean” world of numbers. The world of such numbers was discovered by German mathematician Kurt Hensel around the year 1900. Since then, this number system called “p-adic numbers” has become an indispensable and important part of modern mathematics. This talk starts with the naive idea of “numbers with infinite digits” and invites you down the natural path to “p-adic numbers”.

Title: Non-archimedean geometry — Past and Present —
Abstract: In this talk I will give a non-professional introduction to non-archimedean geometry in general, including rigid geometry, Berkovich geometry, etc., as well as some applications and current trends. We first discuss rigid geometry, as closely as possible to its historical order, and try to make it clear that, although one has to use several fancy looking machinery such as Grothendieck topology, it is actually based on a natural way of thinking. In non-archimedean geometry, the question of how to set up the concept of points is one of the most important points to discuss. Based on this, we discuss Berkovich geometry and the birational approach by Fujiwara and myself. The talk ends with some applications, including my latest contributions. 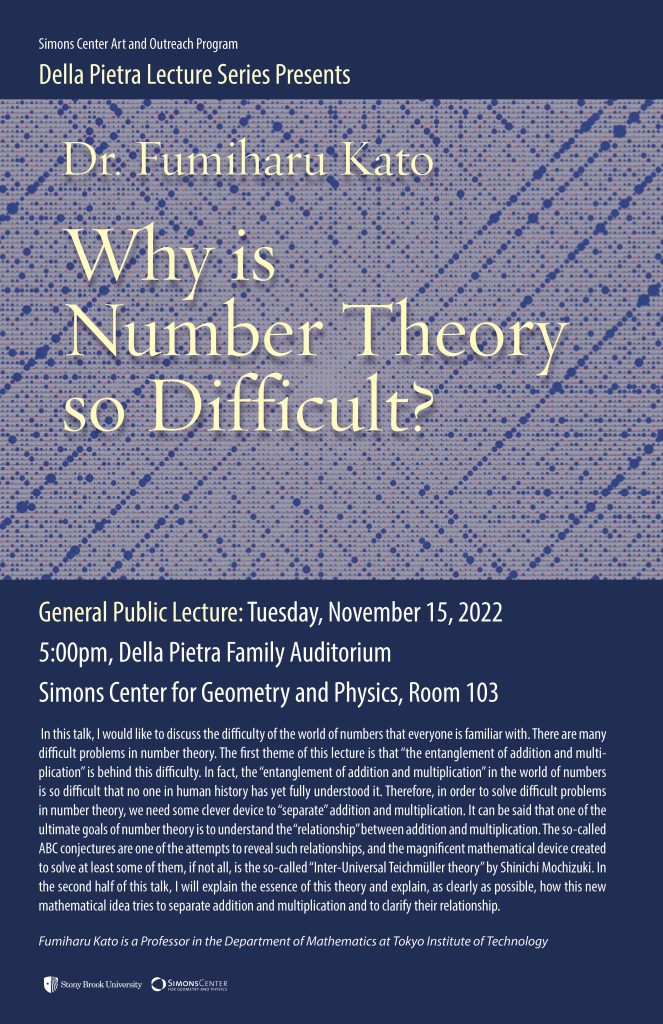