Gauged sigma-models from Riemann surfaces to Kaehler targets have been an important ingredient in recent developments at the crossroads of quantum field theory, geometry and topology. Of particular interest are models that exhibit self-duality, since they are more amenable to rigorous treatment — they incorporate a rich mathematical structure reflecting the fact that they admit certain local extensions accommodating representations of the N=(2,2) supersymmetry algebra. Twisted versions of these supersymmetric models yield topological quantum field theories that are defined on arbitrary Riemann surfaces. The correlators of such theories are formally expressed through path integrals, but they localize to finite-dimensional integrals which have a rigorous formulation. The TQFTs obtained via an A-twist localize to the moduli space of solutions to the vortex equations, whose quantum observables are intimately related to gauged Gromov-Witten invariants constructed from the action on the target manifold. They realize the quantum equivariant cohomology ring of the group action on the target, in a generalization of the familiar framework for Gromov-Witten theory for pseudo-holomorphic maps from a complex curve to a symplectic manifold. When the target of the sigma-model is an equivariant Calabi-Yau manifold, one can also produce an alternative B-twist, whose correlators localize to the Kaehler quotient of the target. The potential of studying two-dimensional self-dual gauged sigma-models has already been vindicated by a number of recent breakthroughs, which we intend to showcase in this workshop.

This workshop is a part of the Fall 2014 program, Gauge Theory, Integrability, and Novel Symmetries of Quantum Field Theory, which is organized by Anton Kapustin, Nikita Nekrasov, Samson Shatashvili, Volker Schomerus, and Konstantin Zarembo. This program takes place from September 2 – December 19, 2014. 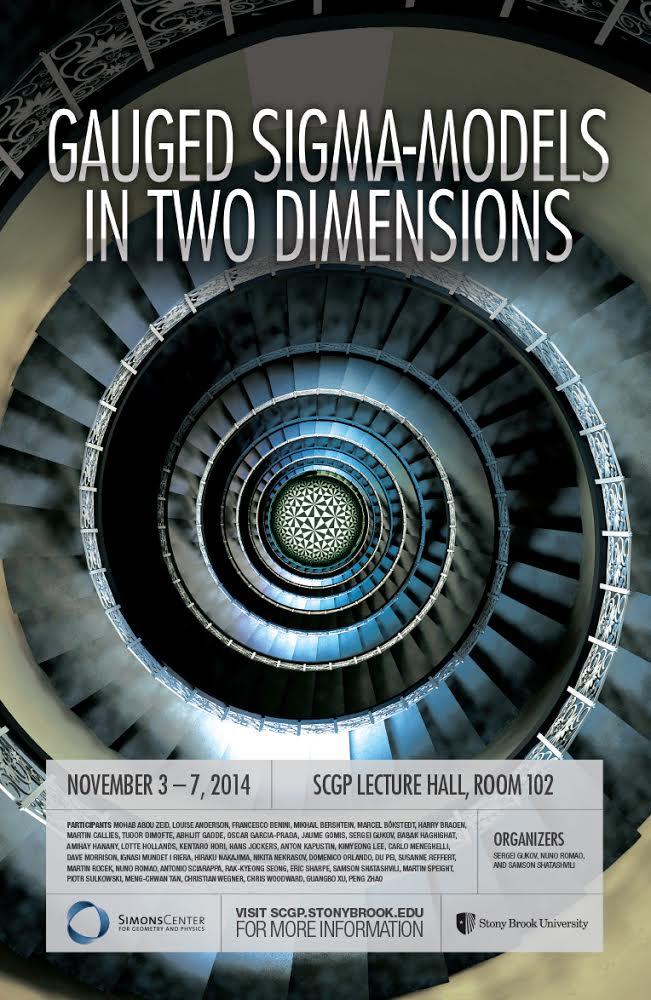