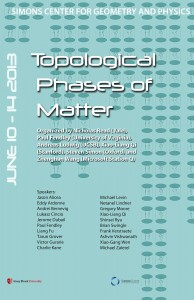 A topological phase of matter can be broadly defined as a (quantum-mechanical) phase of matter in which the ground state has a gap for all local excitations. This seemingly uninspiring definition gives rise to interesting phenomena for a number of reasons. Ground state correlation functions of local operators decay exponentially fast with distance, so the leading asymptotically low-energy (below the scale of the gap) and long-distance observable properties will be independent of the metric or of the length scale in the correlation functions|they are topological invariants (however, such observables might all be zero, giving the trivial topological phase). Moreover, the observable properties will remain unchanged under a small change in Hamiltonian, because the Hamiltonian is the integral over space of a local operator, which cannot affect the topological observables.  Examples of such topological observable properties are (i) the Hall conductivity, which is quantized (but possibly zero) in these systems; (ii) ground state degeneracy when the space on which the phase lives is topologically non-trivial, for example a 2-torus as opposed to a 2-sphere; (iii) existence of \topologically non-trivial” quasiparticle excitations above the true ground state, and the quantum numbers and non-trivial statistics (behavior under adiabatic braiding) of these are topological properties (the braiding is equivalent to expectation values of knots or links formed by Wilson lines in spacetime). Related topologically \protected” effects include (iv) gapless excitations on the boundary of a region filled by the topological phase, which may be described by a conformal field theory, and cannot be rendered gapped (massive) by any perturbation in the Hamiltonian.  Most importantly, topological phases exist in nature, and more are being discovered. Many are two-dimensional, but examples in three dimensions are now being uncovered. Theory is leading experiment: for example, three-dimensional topological insulators were predicted, then confirmed.

This workshop is part of the Spring 2013 program Topological phases of matter, Organized by Nick Read