Most of us perceive Origami and kinetic sculptures as distinctly separate art forms. The OCEAN BEASTS exhibition at the Simons Center for Geometry and Physics, curated by Flo Tarjan, presents both types of artistic vision by the one of the best in their respective fields. This show provides evidence that both creative skills have math and geometry as their common denominator.  This exhibition reflects on geometric and aesthetic connections between folded paper art and fantastical kinetic sculptures; Theo Jansen’s giant machines inspire awe as they slowly progress over dunes powered by only wind energy. His beasts are juxtaposed against swirling paper shapes and the finest origami reflected through wonderful glass creations.

Witness a series of multimedia presentations, a chamber concert as well as an in-house origami artist who will demonstrate how folded paper comes to life.

All lectures, receptions, and concerts are free and open to the public.

Tuesday, July 31
5:30 pm Father and son team Martin Demaine and Erik Demaine will give a public talk with slides: a technical presentation focusing on the mathematics of origami
6:30 pm Reception
7:00 pm Concert by Leon Livshin

Ludwig van Beethoven’s Cello Sonata No. 3 in A major, Op. 69
Alfred Schnittke Variations for the piano on one  Chord (1966)
J.S. Bach Suite for Solo Cello no. 1 in G major – Prelude
Improvisation on Prelude by Renaud Dejardin
Intermission
Frederic Chopin Ballade in g minor op23 N1
Cesar Franck Sonata in A major for Cello and Piano

Béla Bartók Violin Sonata No. 1 for violin and piano, Op. 21  (1921)
Intermission
Maurice Ravel Piano Trio in A minor for piano, violin and cello

Michael Assis is a Research Assistant in the Department of Physics at Stony Brook University pursuing a PhD in physics under Prof Barry McCoy in statistical mechanics; he earned a bachelors degree in both physics and mathematics from Taylor University and spent a year performing atmospheric physics research at
the Goddard Space Flight Center in Maryland studying noctilucent clouds .  He has been folding origami since he was 9 years old, and since 2001 he has been designing origami models that have been displayed them at various origami conferences in the United States and France. His talk will focus on the quantification of complex origami folding; in a famous 1996 paper, Bern and Hayes proved that assigning crease directions, as well as determining the ordering of layers of flaps, is NP-hard.  In this talk, details of their proof will be presented, as well as new results on origami diversity.

Dr. Erik Demaine is a Professor of Computer Science at MIT and was the youngest professor in the history of the Massachusetts Institute of Technology when he joined their faculty in 2001 at hte age of 20. In 2003 he was awarded a MacArthur Fellowship as a “computational geometer tackling and solving difficult problems related to folding and bending—moving readily between the theoretical and the playful, with a keen eye to revealing the former in the latter”. His PhD dissertation in the field of computational origami awarded him the Canadian Governor General’s Gold Medal and the NSERC Doctoral Prize (2003) for the best PhD thesis and research in Canada (one of four awards).  Demaine’s research interests range throughout algorithms, from data structures for improving web searches to the geometry of understanding how proteins fold to the computational difficulty of playing games.  He appears in the recent origami documentary Between the Folds, co-wrote a book about the theory of folding (Geometric Folding Algorithms), and a book about the computational complexity of games (Games, Puzzles, and Computation). His interests span the connections between mathematics and art, particularly sculpture and performance, including curved-crease sculptures in the permanent collection of Museum of Modern Art (MoMA), New York. His work can be viewed at www.erikdemaine.org.

Martin Demaine is a visual artist and theoretical computer scientist. Martin started the first private hot glass studio in Canada and has been called the father of Canadian glass. Since 2005, he has been an Artist-in-Residence at the Massachusetts Institute of Technology. His artistic focus is on sculpture with
hand-folded paper and hand-blown glass, with additional interests in film. Most of his recent artwork explores the connections between mathematics and art, using mathematics as both a tool and inspiration for sculpture. His curved-crease folded paper sculptures, jointly designed and made with his son Erik Demaine, are in the permanent collections of the Museum of Modern Art (MoMA) in New York and of the Smithsonian American Art Museum. He appears in the recent documentary Between the Folds about the art and science of origami, his work can be viewed at www.martindemaine.org

Christine Edison is a math teacher and origami artist based in Chicago; she blogs about her origami and other interests at cedison.wordpress.com.  Eight years ago Christine Edison needed to start a club with a ten dollar budget for the entire school year, her solution was origami and that started her paper journey. Rapidly her interest changed from following other peoples diagrams to creating her own designs.  Using iterative techniques she designed boxes, which she displayed at OUSA’s annual origami convention.  There she met Eric Gjerde, Joel Cooper, and a host of other creative artists and was introduced to tessellations.  Since then she has become fascinated with curved structures and three dimensional tessellations. Currently she teaches high school mathematics, folds, and dances.  The SCGP is excited to host Christine Edison as the Artist–in–Residence during the Ocean Beast summer exhibition, July-August 2012.  Please see details under Origami Workshops for more information about Christine’s demonstrations.

Elena Baksht received her Master’s degree in Music from the Juilliard School after studying at the Moscow Conservatory and the Manhattan School of Music, she currently teaches piano at the College of Music at Michigan State University.  Ms. Baksht performed with the Moscow Philharmonic Orchestra at the age of 11 and has since played at numerous world renown venues such as Carnegie Hall and with such distinguished organizations as the Barcelona Symphony Orchestra and the Miami Symphony; she combines her passion for music with her poetry and is working on a film series entitled, “Tales of Russia through the Eye of Poetry and Music.”  Her full biography can be accessed at www.elenabaksht.com.

Dmitri Berlinsky received his Master’s degree from the Moscow Conservatory and has studied at the Juilliard School, he currently teaches violin at the College of Music at Michigan State University.  He was the youngest winner in the history of the Paganini International Violin Competition in Genoa, Italy and has since won numerous prizes including the grand prize at the Montreal International Violin Competition.  Mr. Berlinsky has performed all over the world, including at Carnegie Hall and the Kennedy Center.  Please visit his website www.dmitriberlinsky.com for more information.

Renaud Dejardin completed his cello studies in Paris and came to work with Timothy Eddy at Stony Brook University. He was laureate of several renowned international competitions including the Rostropovitch Competition in Paris, Paulo in Helsinki, Bach in Leipzig. He’s now playing regularly as a soloist and is also invited to conduct major orchestras and contemporary ensembles. He was invited to conduct at Opera National de Paris, Orchestre National de Lille, Orchestre National d’Ile-de-France and recorded many cds. Renaud Dejardin is now living in Paris, where he keeps busy with teaching, playing, and conducting.

Natalia Khoma was awarded the Artist Diploma of Boston University and has studied at hte Lviv Central Music School and Moscow Conservatory.  She is the first and only Ukranian to become the laureate of the Tchaikovsky Competition and has played world-wide and has won top prizes at the Budapest Pablo Casals Competition, Markneukirchen (Germany) and the Tchaikovsky International Competitions, as well as first prize at the Belgrade International Cello Competition.  She is currently an Associate Professor at the College of Charleston, South Carolina and co-founder and music co-director of the Charleston Music Fest.  Her full biography can be viewed at www.nataliakhoma.com.

Leon Livshin began his piano studies at age 5 at the music school for gifted children in his native Lithuania. He then studied at the Lithuanian Academy of Music and performed across Europe and the former Soviet Union. At age 14 he was invited to play for Pope John Paul II at the Vatican. For his graduate studies, Mr. Livshin attended the Moscow Tchaikovsky Conservatory, following the Stuttgart Hochschule, where he received a Soloist diploma. In 1997, Mr. Livshin came to the United States on full scholarship to the Eastman School of Music in Rochester, New York, where he studied with renowned American pianist Barry Snyder. Additionally, Mr. Livshin holds a doctorate degree from the Stony Brook University. As a soloist and chamber music player, Mr. Livshin has performed at venues such as Carnegie Hall, the Kennedy Center, Merkin Hall, Steinway Hall, Cologne Philharmonic, Berlin Music HochSchulle, Vienna Koncerthaus, Zurich Town Hall, Moscow White Hall, and the United Nations. He has also been broadcast on National Public Radio, as well as classical radio in Boston and Rochester.

Anna Rabinova studied at the Tchaikovsky Conservatory and began performing with the Moscow State Symphony at the age of 13; she is currently a member of the New York Philharmonic and a faculty member at the Manhattan School of Music.  Ms. Rabinova has performed around the world in elite venues that include the Shauspielhaus, Berlin, Carnegie Hall and Alice Tully Hall and with such noted orchestras as the Moscow State Symphony Orchestra, the Moscow Radio Orchestra and the Berlin Symphony.  For more information about Ms. Rabinova’s exemplary career, please view Anna Rabinova of the NY Philharmonic.

Yoram Youngerman is a Visiting Professor of violin at Duke University and is currently on the faculty of the University of North Carolina, Chapel Hill.  He has performed extensively around the world including at Lincoln Center and the Barbican Center, London.  Mr. Youngerman is the founder of MYCO@UNC YOuth Chamber Orchestra that was recently invited to tour China.  For more information about this outstanding performer, please visit his site at: music.unc.edu/facstaff/youngerman.

All workshops are held between 11:30 am – 2 pm in the SCGP Art Gallery.
Drop-in visits are more than welcome!

Please check back for details on the workshops for the weeks of August 6th and 13th. 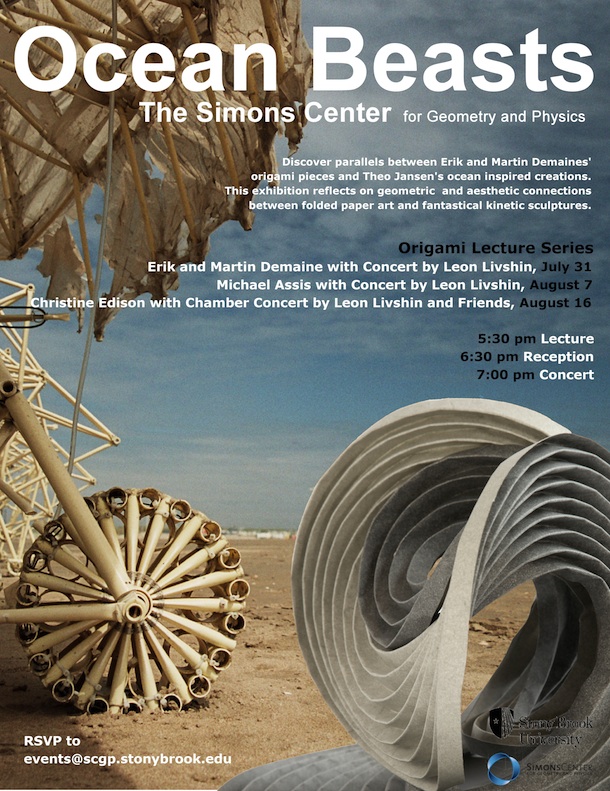 Please Join Us This Tuesday Evening for a Special Performance by the QuadrATOMIC Saxophone Quartet
David Ben-Zvi, “Representation Theory and Gauge Theory”