On November 17, 2016, Stony Brook University, and the Simons Center for Geometry and Physics, recognized long-time supporters, the Della Pietra family, by dedicating the Simons Center auditorium the “Della Pietra Family Auditorium.” An event was held to honor the family — brothers Vincent and Stephen Della Pietra, and their wives Barbara Amonson and Pamela Hurst-Della Pietra — and acknowledge their many years of commitment to enhancing the University’s most innovative research and academic programs. 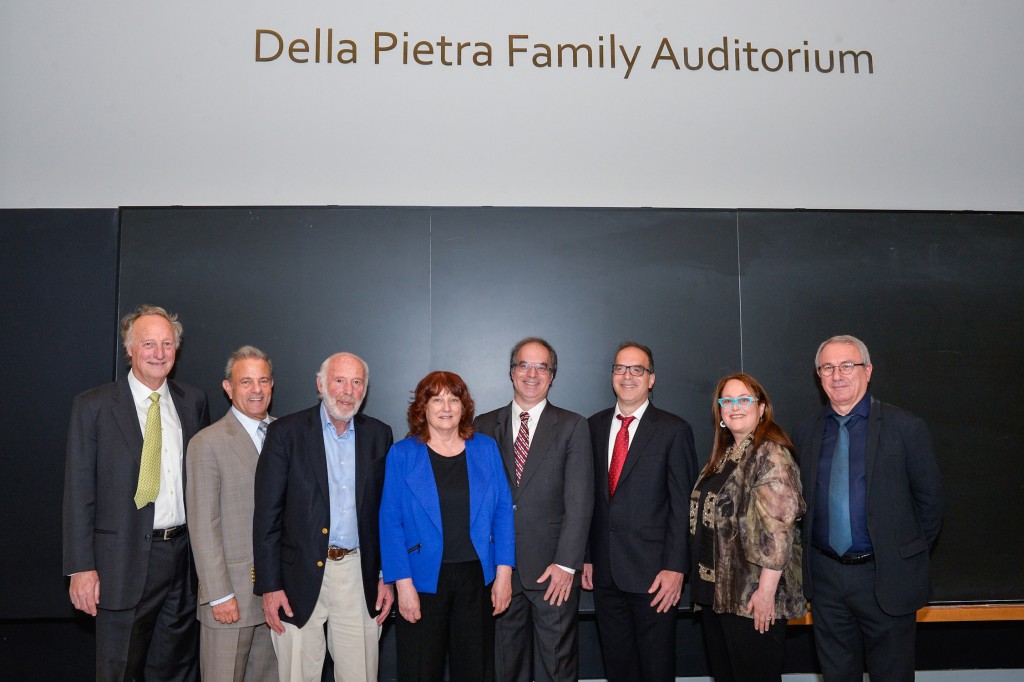 The relationship between the Della Pietra family and the Simons Center for Geometry and Physics is a deep one, and began in 2011 with a generous donation to fund the Della Pietra Lecture Series. Physicists themselves, the Della Pietra brothers, along with their families, started the series as means to bring greater awareness of recent and impactful discoveries in Physics and Mathematics to the Long Island community, in particular to high school, undergraduate and graduate students with an interest in the sciences. By attracting world-renowned scientists to the Simons Center for Geometry and Physics, the series enhances the intellectual activity of the Center, and provides an extra ordinary opportunity for both the campus and local community to connect with brilliant minds. Each edition of the series consists of three separate lectures geared towards a specific academic audience; a technical talk for advanced faculty, a high school lecture for young students, and a general talk, open to the public. Over the years, the Center has been pleased to welcome many notable speakers such as Brian Greene (Columbia University), John H. Schwarz (California Institute of Technology), Bonnie Bassler (Princeton University), and Nobel Laureates David Gross (Kavli Institute for Theoretical Physics)and Frank Wilczek (MIT) to name just a few.

“We are at the vanguard of new thinking in relation to the nature of the universe, resulting from the collaboration and collisions of ideas between some of the world’s top researchers,” said the Simons Center’s Director Luis Álvarez-Gaumé. “The Della Pietra family gift is a gratifying validation of our work and we intend to continue generating a significant return on their investment in our mission.

”In addition to their steadfast support of the Simons Center for Geometry and Physics, the Della Pietra family has made many impactful contributions to the greater Stony Brook University and has invested more than $10 million across campus, making them one of the University’s top 10 donors of all time. They’ve helped provision the Global Health Institute, the Staller Center for the Arts, the Laurie Center for Pediatric MS, the College of Arts and Sciences Teaching and Education Fund, the Children’s Hospital Task Force, a visiting Professorship in the Department of Music, a family endowed Chair in Biomedical Imaging, and countless student scholarships.

At the dedication event, faculty, staff and Stony Brook University officials enthusiastically came together to pay tribute to this all-too-deserving23 family. Among the many in attendance were Simons Center Founder James H. Simons, University Provost Michael A. Bernstein, Simons Center Board of Trustees members, and the Center’s newly appointed Director, Luis Álvarez-Gaumé, whose relationship with the Della Pietra brothers has come full circle, beginning many years ago when he was their Academic Advisor at Harvard University. At a time when support of higher education is of utmost importance, the contributions from the Della Pietra family have been invaluable, and this sentiment of appreciation was echoed throughout the evening. “We are humbled by the Della Pietra family’s confidence in Stony Brook. Their philanthropy is invigorating,” said Senior Vice President of University Advancement Dexter A. Bailey, Jr. “The Della Pietra Family Auditorium in the Simons Center is a permanent reminder of our gratitude and the impact the family has had on our campus community.”

Della Pietra Lecture Series from 2011 to present date are now available as a special collection on the Center’s YouTube channel.

Date: Wednesday, May 31, 2017 Lecture: 11:00 am, Simons Center Della Pietra Family Auditorium Title: “Where will our energy come from in the future?” Abstract: Global demand for energy is rising. Today, 80% is met by burning fossil fuels (oil, coal and gas). Will demand go on rising? Will fossil fuels continue to dominate? Will […]

General Public Lecture Thursday, October 1, 2015 Wine and Cheese Reception: 5:00 pm, Simons Center Lobby and Art Gallery Lecture: 5:45 pm, Simons Center Auditorium, Room 103 Title: “How Bacteria Talk To Each Other” Abstract: Bacteria communicate with one another using small chemical molecules that they release into the environment. These molecules travel from cell […]

General Public Lecture Tuesday March 31, 2015 Wine and Cheese Reception: 5:00pm, Simons Center Lobby and Art Gallery Lecture: 5:30pm, Simons Center Auditorium, Room 103 Title:The Frontiers of Fundamental Physics Abstract: At the frontiers of physics we search for the principles that might unify all the forces of nature and we strive to understand the […]

Public Talk Tuesday March 4 at 5:30pm, Simons Center Auditorium, room 103: Title: “Expanding the Doors of Perception” Abstract: Modern physics has taught us that our unaided senses perceive only an infinitesimal portion of physical reality. Within that theme, Frank Wilczek, PhD, a Nobel Laureate and professor of physics at MIT, will especially emphasize color […]

Professor Martinus Veltman of the University of Michigan (retired) will present a Della Pietra Lecture entitled “The Higgs Particle” at 5:30 pm on Thursday, January 9, 2014 in Room 103 of the Simons Center for Geometry and Physics. 5:00pm – Wine and Cheese Reception 5:30pm – Public lecture by Martinus Veltman, “The Higgs particle” Professor Veltman together with […]