Over the last few years we have witnessed a resurgence of interest in geometrical facets of T-duality, with developments coming thick and fast on a number of fronts. The overall goal of the workshop is to bring mathematics and physics communities together to take stock of recent progress, in a bid to create synergies that will seed future collaboration and stimulate advances in both the formal and applied aspects of T-duality.

We recall that much of our knowledge of String Theory rests on three intimately interconnected pillars: the sigma model, Supergravity, and duality. The sigma model allows us to describe strings on general backgrounds,
whereas Supergravity provides a low-energy effective description of the dynamics; its solutions give String Theory vacua. String Theory has duality symmetries that relate seemingly different Supergravity backgrounds. The symmetry known as T-duality exemplifies how strings experience geometry in a new light in contrast to point particles.

The objectives of the workshop fall under three main themes. Firstly, we aim to review progress on natural generalizations of bosonic Abelian T-duality to fermionic and non-Abelian (spherical) isometries, as well as purely algebraic formulations, such as Poisson-Lie T-duality. It is an open problem to understand these so-called generalized T-dualities in terms of CFTs and String theory, and also more recently, their connection to integrable models. Secondly, we plan to bridge the gaps between Hitchin’s generalized geometry in mathematics and Double Field Theory from physics, where T-duality appears as a manifest symmetry of the doubled target space. We will also touch upon the exceptional geometry of M-theory, non-geometric backgrounds and the extent to which these new geometries may be regarded as “stringy” generalizations of Riemannian geometry. Lastly, we hope the workshop will act as a catalyst for further the study of generalized T-dualities in the context of holography, where the connection to scattering amplitudes and the ubiquitous AdS/CFT correspondence have yet to be fully understood.


The gong show will be 10 talks that are each about 10 minutes long all taking place on Thursday, May 12, 2016. An extra 5 minutes has been added to each to talk to allow time for participants to set up. Tentative Schedule: 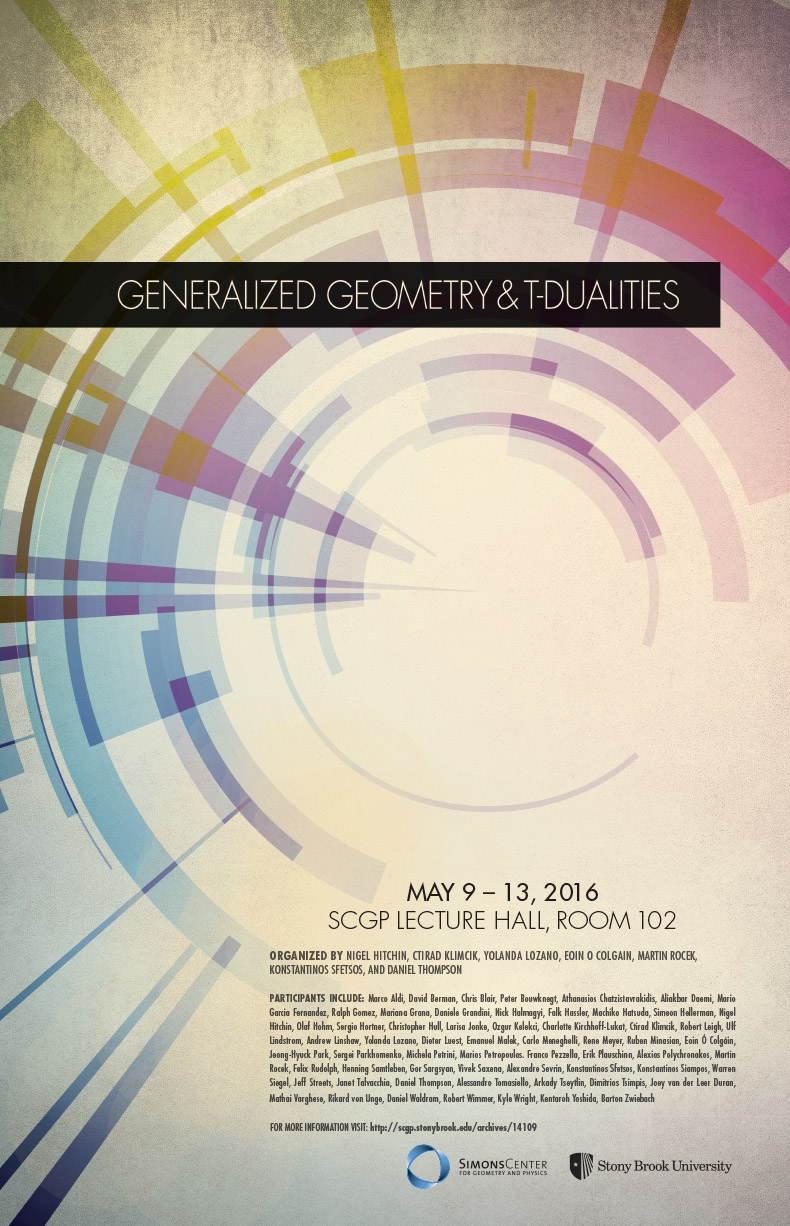