By jklein on September 18, 2013 in legacy video post, videos 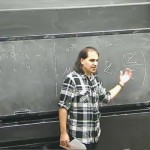 Abstract: Perturbative scattering amplitudes in gauge theories have remarkable properties and hidden infinite dimensional symmetries that are completely obscured in the conventional formulation of field theory using Feynman diagrams. This suggests the existence of a completely different picture for what amplitudes really are, where local space-time physics and unitary evolution in Hilbert space do not play a central role, but arise as emergent phenomena from more primitive principles. For maximally supersymmetric theories in the planar limit, a step in this direction was taken last year by representing amplitudes directly as on-shell processes, establishing a surprising connection between scattering amplitudes and the geometry of the “Positive Grassmannian”, a structure co-incidentally studied by mathematicians in the past decade. In this talk I will describe ongoing work on the last step in the reformulation of this physics, finally completely independent of all the usual field-theoretic notions, where the amplitude is invariantly understood to be “the volume” of “The Amplituhedron”, a mathematical structure significantly generalizing the Positive Grassmannian, as of yet un-known to mathematicians.  In this talk I will show that the number of surgeries is indeed finite and that the curvature is globally bounded by $C t^{-1}$ for large $t$. Using this curvature bound it is possible to give a more precise picture of the long-time behavior of the flow.