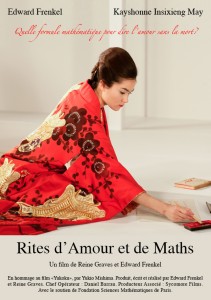 An interview with Edward Frenkel. After leaving Russia, Frenkel obtained his PhD at Harvard University and he is now at Berkeley. His famous work on affine algebras led to the recent breakthroughs in the Geometric Langlands program and its relation to quantum field theory.

To hide it from the forces of evil, Edward Frenkel, a mathematician from Berkeley, tattoos the formula of love on his lover’s skin, in his last movie “Rites of love and math”…

What brought you from the ivory towers of Berkeley to the world of showbusiness?

I have always wanted to find a cinematic language for showing the beauty of mathematics. I believe that a mathematical formula can be beautiful – meaning its content – in the same way that a painting or a piece of music can be beautiful. However, to most people this does not make any sense, because they don’t really know what math is really about. We, mathematicians, are the first to take the blame for this, because we have not done a good job communicating with the general public about what we do and why this is interesting (or beautiful). So the question I asked myself is: how to change this perception?

I think there are actually many ways to do it, and the medium of film offers an excellent venue for this. For example, one can make a long documentary series and educate people about mathematics, or a full feature film about a particular subject or a particular mathematician. All of this should certainly be pursued and has been, to some extent (but not enough, in my view!). But this requires a lot of time and money. I wanted to do something more modest – a short film. Then it can be done more quickly and on a smaller budget, but the challenge is that I can’t really get into the details of the subject.

What is the movie about?

So how to express the beauty of a mathematical formula in a short film? I thought I should use a metaphor. Something that everyone would agree is beautiful. How about the beauty of a female body? OK, then we need to find a way for the two to merge. That’s why in my film the main character, Mathematician, tattoos his formula on the body of his lover. This is in fact the “formula of love” which he has found, and now he is pursued by “forces of Evil” who want to take possession of the magic powers of his formula, and so he decides to hide it on her body…

I was fortunate to meet a talented French film director Reine Graves, with whom I have collaborated on this movie. It is unusual in several respects. First of all, it is homage to the short film “Rite of Love and Death” by the great Japanese writer Yukio Mishima (hence the title of our film: “Rites of Love and Math”), and we follow his style and aesthetics (but our story is different). Like Mishima’s film, our film is set on the stylized stage of the Japanese Noh theater, and it is silent, with the beautiful music from Wagner’s “Tristan and Isolde” playing in the background (as well as an original rock composition based on Wagner). Like Mishima’s film, our film is really about Love and Death, Beauty and Truth. And I hope it will help the viewer to think about math in a different way.

In movies Maths has been approached mainly through the “crazy scientist” cliche’ as in “Pi” by Aronofsky or in “A beatiful mind”. What is the approach to mathematics and the people who invent it in this movie?

You are absolutely right about the stereotype of mathematician which has been created in the mass culture! I think this is very bad for two reasons: first of all, people do not realize how many fascinating personalities there are among mathematicians. And second, would young people want a career in math or science after watching this kind of movie?
So I really wanted to go against this stereotype. I would like the viewer to see the Mathematician in our film as a human being, as someone they can relate to – he is trying to do his best against adverse circumstances, is someone who can love and be brave, and is capable of standing up for his beliefs… The story in the film is an allegory, a fairytale – so we exaggerate, of course. But there are allusions to many things which are very real: like the moral dilemmas that scientists must face sometimes when pursuing their ideas.

I wish I could say that my mathematical work will save the world, but I know that this would be an exaggeration. He is a fictional character, but I have tried to give him some attributes of a “real life” mathematician. For example, the scene of the tattoo is, for me, a metaphor of what it’s like to do mathematical research – the frenetic energy of it, the feeling of being possessed – to the point that the entire world ceases to exist… He literally gives his life for it in the movie… I was very pleased when my mathematician friends who have watched the film told me that they did see this in this scene.

Would you rather keep working as a mathematician or switch to the movie industry now?

I would really like to do both! I don’t see why not. I am still very excited about the math projects I am working on. I just had an important paper (joint with Langlands and Ngo) come out a few days before the premiere of my film. On the other hand, making this film was also an amazing experience for me, something I would certainly like to repeat.

A last question, what is the magic equation of love?

I wish I could say that I have found the “formula of love”, like my character in the movie, but unfortunately, that’s not the case. To be honest, I am not even sure that one exists! But when we were making the movie, I had to decide which formula to use for the tattoo. It had to look beautiful, impressive (even to a non-mathematician) and also I wanted it to be a true formula. In the end I settled on a formula from the joint paper with my good friends Andrei Losev and Nikita Nekrasov, entitled “Instantons beyond topological theory”. This work, which came out in 2006, puts forward a new approach to understanding quantum field theories of a particular kind. In the course of our study we discovered some unexpected identities expressing the equality of different computations of correlation functions. The “formula of love” is the simplest of those identities, and I must say that even if it’s not exactly “formula of love”, it was the result of a lot of hard work, which I am very proud of.