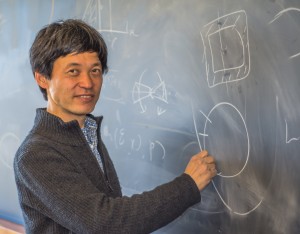 Kenji Fukaya became a permanent member of the Simons Center on April 1, 2013. He received his BA in Mathematics at the University of Tokyo in 1981, and continued graduate studies at the University of Tokyo, receiving his PhD in 1986.  His thesis was entitled A boundary of the set of Riemannian manifolds with bounded curvatures and diameters. He was at the University of Tokyo from 1983 through 1990, where he was first a research assistant and then an Associate Professor. He was a Professor of Mathematics at Kyoto University in 1994 until coming to the Simons Center.  Fukaya’s recent work has been in symplectic geometry and in particular has centered around the study of Lagrangian submanifolds and the Floer homology related to intersections of these submanifolds. Fukaya developed and has studied extensively a theory in which the Lagrangian submanifolds of a given symplectic manifold are the objects of a generalized category, now called the Fukaya category, and the morphisms are the Floer homology groups. This work is closely related to Kontsevich’s homological mirror symmetry conjecture . This is now formulated as the conjecture that the derived category of coherent sheaves on a Kahler manifold should be isomorphic to the Fukaya category of a `mirror’ symplectic manifold. His earlier work was in Riemannian geometry and especially dealt with collapsing results in this context. Fukaya was awarded the  Japan Academy Award in 2003, Asahi prize in 2009, and Fujiwara prize in 2012.  He is a member of the Japanese National Academy of Sciences.